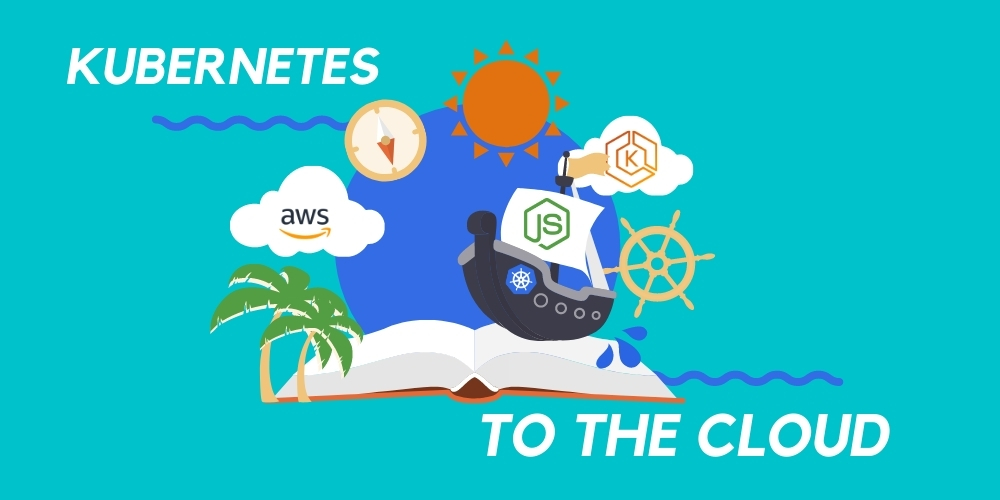 Since 2013 when it was released to the public, Docker has become an industry-standard tool for development teams to package applications into small executable containers. A year later, Kubernetes was released by Google to manage large amounts of containers, and provide features for high availability (HA) and auto-scaling.

While Kubernetes adds many benefits to your container management, you might find the process of setting up Kubernetes within your on-premise infrastructure quite challenging, especially on the first try. To overcome this challenge, managed Kubernetes is offered as a service by several cloud service providers.

In this article, you will learn about the services offered by Amazon Web Services (AWS) for using Kubernetes.

This article will walk through the hands-on creation of a Kubernetes cluster to deploy a containerized Node.js application secured with Okta.

To follow along with the cluster creation steps, you will need the following:

While Kubernetes is open-source and can be used within your on-premise infrastructure, Kubernetes is also cloud-agnostic. Major cloud service vendors provide Kubernetes as a Platform as a Service (PaaS) offering to deploy and scale containerized applications across virtual machines. The Elastic Kubernetes Service (EKS) from Amazon Web Services is one example of such an offering.

The Amazon Elastic Kubernetes Service (EKS) lets you deploy, run, and scale your containerized application within a Kubernetes cluster consisting of EC2 instances acting as worker nodes. For customers using a hybrid cloud model, the Amazon EKS Anywhere deployment option allows you to use Kubernetes clusters within a supported on-premise infrastructure.

The Fargate service on AWS also provides cloud customers with the ability to use Kubernetes, but in a serverless manner. When using Fargate, you get to run a pod within a Kubernetes cluster on demand. Fargate helps to reduce the operating cost (OpEx) of your infrastructure as you will only be billed for the pods and not the EC2 instance nodes.

In the following sections, we will focus on using Kubernetes through the Elastic Kubernetes Service.

Understanding the EKS architecture on AWS

An EKS cluster can be created through several tools such as the AWS console, AWS CLI, Cloud Formation, eksctl, or even Terraform, as well as other infrastructure as code tools. When using terminal-based tools such as the AWS CLI or eksctl, you provide the properties of the cluster to be created by EKS, either by using a configuration file or through command line arguments. Within the demo section of this article, you will use the eksctl command line tool to create a cluster.

With regard to the cluster’s security, the internal connection between the control plane and worker nodes uses a certificate file generated on setup. The cluster’s data stored within etcd is also encrypted by default using the Key Management Service on AWS.

An AWS virtual private cloud (VPC) is an isolated virtual network made up of smaller network components such as subnets and internet gateways, amongst others.

A VPC is required for creating a cluster. The VPC is also required to contain subnets within at least two availability zones. These subnets can either be public or private; however, it is recommended to have a combination of public and private subnets so that ingress traffic can be load balanced.

EKS has an uptime Service Level Agreement of 99.95%. As one of the strategies to ensure high availability (HA), an Auto Scaling Group can be used within each Availability Zone to monitor the nodes within a cluster, scaling them to meet your application’s demands or even restarting them when health probes fail repeatedly.

The steps outlined below will guide you through building the Docker image of a Node.js app secured with Okta.

1. Open your terminal to execute the git-clone command below to clone the Okta-secured Node.js application from the OktaDev repository to your local computer.

2. Using your preferred code editor, open the okta-node-express-15-minute-auth-example folder cloned above and create a file named Dockerfile. This file will store the steps for building a docker image out of the cloned application.

Next, paste the code within the code block below into the Dockerfile.

When the docker build command is executed, Docker will perform the following steps to build an image of the application.

3. Create another file within the project directory and name it .dockerignore. This file will specify other files that should not be copied into the Docker image such as a .env file containing sensitive credentials.

Next, add the content of the code block below into the .dockerignore file;

4. Execute the docker build command below to build a docker image of the application using the steps in the Dockerfile you created above.

The tag -t flag specified in the command below will attach a tag of okta-k8-app to the docker image about to be built. This tag will come in handy when you run the docker image.

5. Optionally, create a .env file within the project directory to securely store the Okta client credentials.

Please refer to the article, Build Simple Authentication in Express in 15 Minutes, to create an Okta application, and retrieve the client credentials for the application through the Okta developer console before proceeding further.

Add the client credentials retrieved to the .env file in the format below. (Make sure there is no whitespace before values.)

From your terminal’s output, you can see the logs, indicating that the application is running on port 3000.

Pushing the docker image to the Elastic Container Registry (ECR)

In the last section, you built the docker image for your application. Now you can proceed to create a registry within the Elastic Container Registry, and push the newly created docker image into it.

Execute the ecr-public command below to create a public repository within the Elastic Container Registry. The tag flag --tags will also attach a tag with a key of environment and value of development to the repository. This command works for the us-east-1 region, but does not work in all AWS regions.

Next, execute the docker tag command below to tag the docker image built previously.

Execute the command below to authenticate your computer’s docker client with your ECR repo through an authentication token.

Next, execute the command below to push the tagged docker image to the ECR repository you created.

So far, you have pushed a docker image to the Elastic Container Registry. Let’s create a cluster in EKS that will use the docker image you previously pushed.

Use the eksctl CLI tool to create a cluster within EKS. eksctl is a third-party CLI tool written in Go that simplifies the management of EKS clusters by leveraging AWS CloudFormation to manage your cluster and other dependent objects such as VPCs, and subnets.

When the create cluster command is executed without a configuration file, eksctl will create the following AWS resources, which the cluster depends on:

Execute the create cluster command below to create a new cluster named okta-k8-cluster within the AWS region specified. This can take a considerable amount of time, so wait until the command is executed successfully.

Note: Replace the <AWS_REGION> placeholder with the region attached to your AWS account. For this tutorial, we are using the us-east-2 region.

At this point, you have an empty Kubernetes cluster running on EKS. Let’s proceed to create three resources within the cluster.

Using the three steps below, you will create three YAML files within the application directory to store the configurations for the following resources that will be created within the cluster: Secret, deployment, and service..

1. Create a file named loadbalancer.yaml. This YAML file will contain the configurations for creating a load balancer for the okta-k8-cluster, enabling you to access the application that will run within the cluster.

Add the content of the code block below into the loadbalancer.yaml file.

Execute the command below to create a load balancer using the configuration in the loadbalancer.yaml file above. This command creates a load balancer within the Elastic Load Balancing (ELB) service on AWS, which you can access through an endpoint.

Next, execute the command below to get details about the load balancer we just created.

Note: Take note of the External IP returned among the details of the load balancer above. You will use the External IP in the following steps as an endpoint to access the application.

2. Create a file named secret.yaml. It will contain the fields for a Kubernetes Secret, storing the Okta credentials. A Secret within Kubernetes is a resource used to store sensitive data such as passwords and API keys that have been excluded from your application code for security reasons.

Replace the <LOAD_BALANCER_EXTERNAL_IP> placeholder in the code block below with the External IP value derived from the load balancer details in step 1.

Execute the kubectl create command below, from the directory where the files are located, to create a Kubernetes Secret using the secret.yaml file above. Make sure to replace the placeholders with their actual values.

3. Create a deployment.yaml file and add the content of the code block below to define the properties of a deployment resource type.

The configuration file contains three parts that define a deployment. The metadata defines the resource information; the spec defines the number of pods to be created, the docker image to run within the pods, and a network port within the container to expose. The deployment will also mount the volume for the Kubernetes Secrets.

Note: Replace the <DOCKER-IMAGE-URI> placeholder within the template section in the code block below with the URI of the docker image that you pushed to the ECR.

Execute the kubectl create command below to create the deployment resource using the content of the configuration file above.

Navigate to your Okta Developer Console and click on the application we’re using for this tutorial. 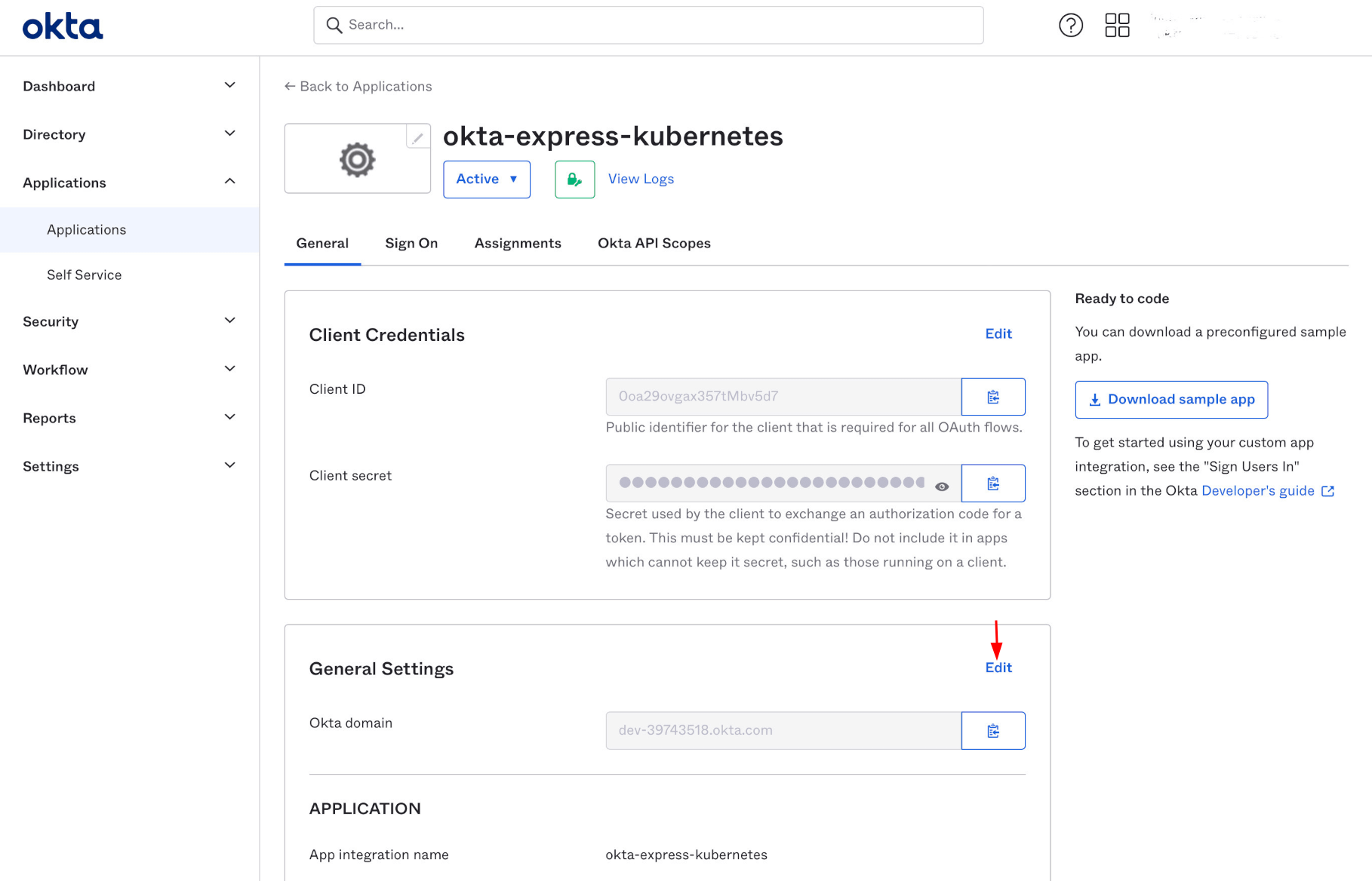 In the LOGIN, section, click the Add URI button within the Sign-in redirect URIs subsection to add a new URI that will be used when initiating an authentication process. Add the load balancer external IP into the input field in the format below, replacing the LOAD_BALANCER_EXTERNAL_IP with your cluster load balancer’s external IP.

Next click the Add URI button within the Sign-out redirect URIs subsection to add a new URI that will be used when signing out of the application. Add the load balancer external IP in the input field in the format below: 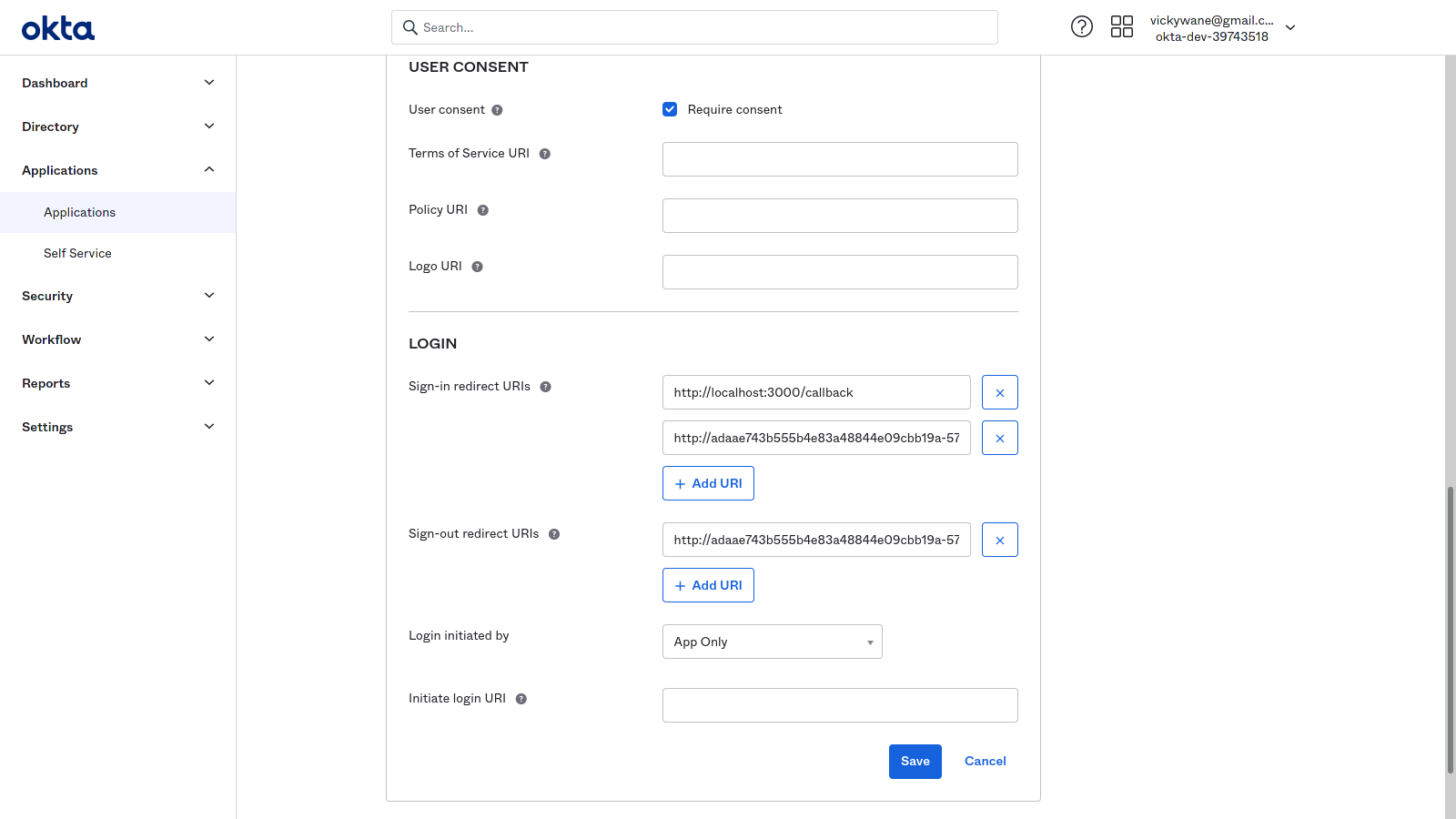 Click the Save button to save the two added URIs.

At this point the application is fully set up and ready for use. With your web browser, you can access the Node.js application through the load balancer’s External IP in the format of http://LOAD_BALANCER_EXTERNAL_IP:3000.

More resources for Kubernetes on AWS

In this article, we covered basic aspects of the Elastic Kubernetes Service on AWS. You created an EKS cluster with a deployment and a service that uses the Docker image of a Node.js application.

Although this article did not focus on testing the scalability of the EKS cluster, you also created a load balancer within the ELB service to handle incoming traffic to the nodes within the cluster. Congratulations!

Want to continue learning about Kubernetes, infrastructure, security, auth, identity, and related topics? Here are some resources from the Okta Developer blog you might be interested in: 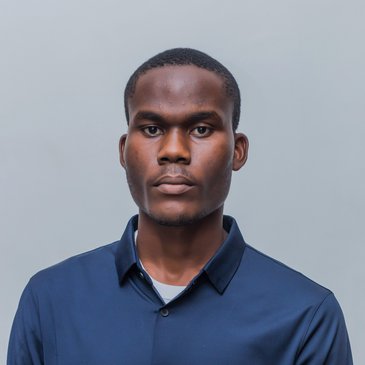