There’s a lot going on in the Java ecosystem lately. Now that major Java versions are released every six months, it can be difficult to keep up. Personally, I develop the majority of my Java applications using Spring Boot. Because of this, I was stuck on Java 8 until Spring Boot 2.1 was released last October.

I was a web developer years before I became a Java developer. I’ve been developing Java for 20 years, so that’s saying a lot! If you’re a Java developer, chances are you’re baffled by the pace of change in the JavaScript world. If you think Java is hard to keep up with, try keeping up with JavaScript and its ecosystem! The good news is there’s an excellent way to keep up with both: just use JHipster.

JHipster 6 uses Spring Boot 2.1 for its backend API, which means you can use Java 11+ to develop your JHipster apps!

If you’d rather watch a video, I created a screencast of this blog post.

How Does JHipster Make Java and JavaScript Development Easier?

JHipster is one of my favorite open source projects on the planet. It’s a development platform to generate, develop, and deploy Spring Boot + Angular applications. In addition, it supports React, Vue, and creating microservice architectures with Netflix OSS, the Elastic Stack, and Docker.

Java developers tend to dislike JavaScript, but many are OK with TypeScript. Guess what? JHipster uses TypeScript for all its UI framework implementations!

JHipster makes Java and JavaScript development easier by configuring everything for you and using the latest versions of its underlying frameworks. Want to upgrade your app to use the latest versions? Simply run jhipster upgrade.

Before you worry about installing JHipster, install Java 11. I recommend using SDKMAN! for this task. If you don’t have it installed, it’s just a command away:

Once you have it installed, you can see all the Java 11 versions available using sdk list java.

If you’d rather use Amazon’s Corretto, simply use 11.0.2-amzn for the name. If you want to be as hipster as possible, you can even use Java 12!

JHipster 6 was released on May 3, 2019. You can install it using the command below.

Create a Spring Boot + Angular App that runs on Java 11+

The most basic way to get started with JHipster is to create a new directory, cd into it, and run jhipster. You’ll be prompted to answer a number of questions about the app you’d like to create. Question range from the name of your app, to the authentication type you’d like to use, to SQL vs. NoSQL.

JHipster also has a domain language (called JDL for JHipster Domain Language) that you can use to define your app.

If you used the above code to create your app, it’ll use the default values:

To generate an OAuth 2.0-enabled app with JHipster, create an app.jh file in a new project directory (e.g., ~/hipapp):

Open a terminal window and navigate to the same directory as this file. Run the following command to generate a Spring Boot API with an Angular UI.

This will create a multitude of files and install dependencies using npm install. Your terminal should look similar to the following when you run this command: 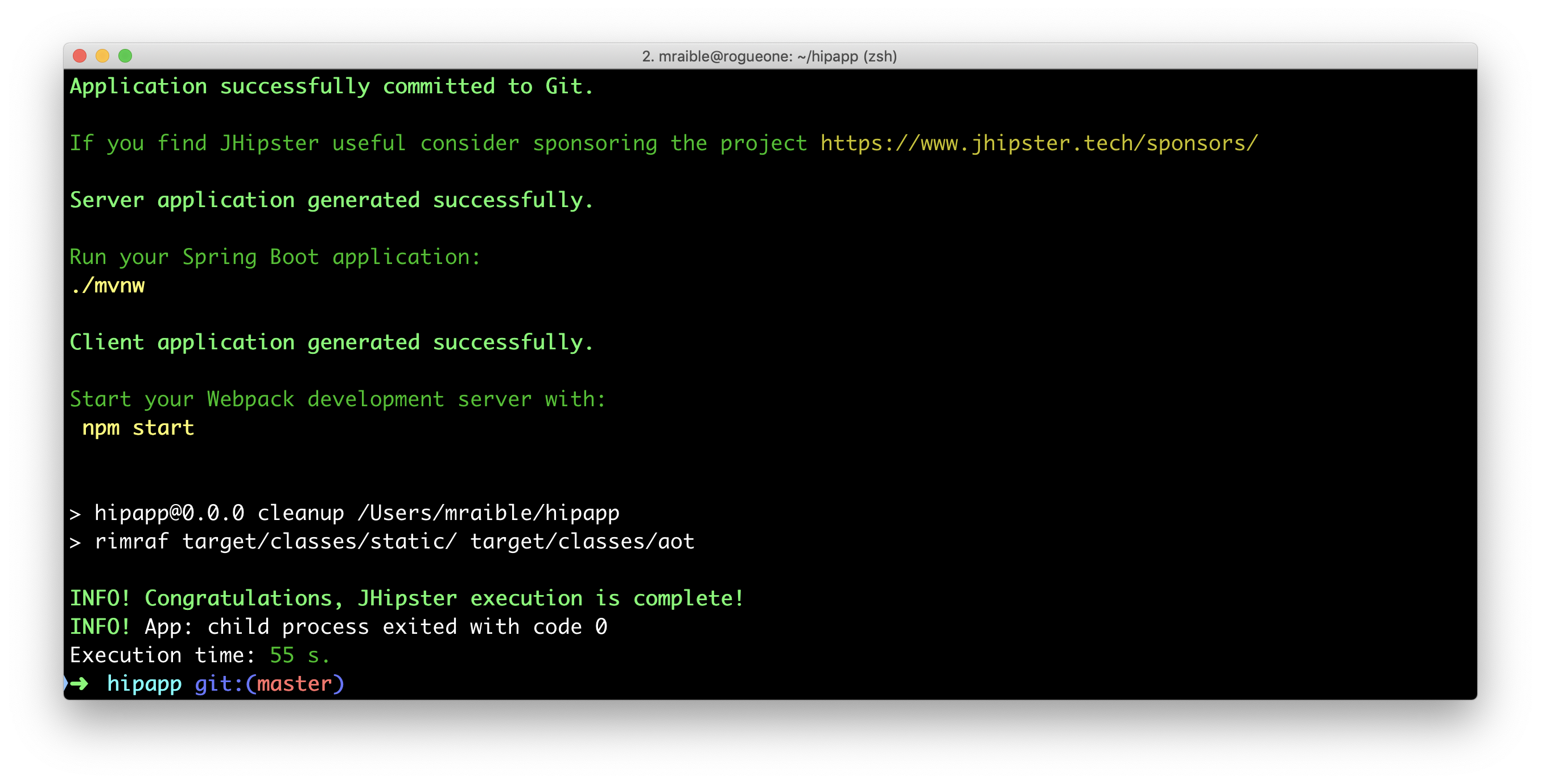 If you’d prefer to see what this command looks line in-action, you can watch the recording below.

Since you specified oauth2 as the authentication type, a Docker Compose configuration will be installed for Keycloak.

Keycloak is an Apache-licensed open source identity and access management solution. In addition to creating a src/main/docker/keycloak.yml file for Docker Compose, JHipster generates a src/main/docker/config/realm-config directory with files in it that configure Keycloak to work with JHipster out-of-the-box.

Run Your JHipster App and Log In with Keycloak

Keycloak must be running for your JHipster app to start successfully. This is because Spring Security 5.1’s first-class OIDC support is leveraged in JHipster 6.

This OIDC support includes discovery, which means that Spring Security talks to a /.well-known/openid-configuration endpoint to configure itself. I completed the migration myself and deleted more code than I added!

Then start your application using Maven:

When your app is up and running, open http://localhost:8080 in your favorite browser and click sign in. You’ll be redirected to Keycloak, where you can enter admin/admin to log in. 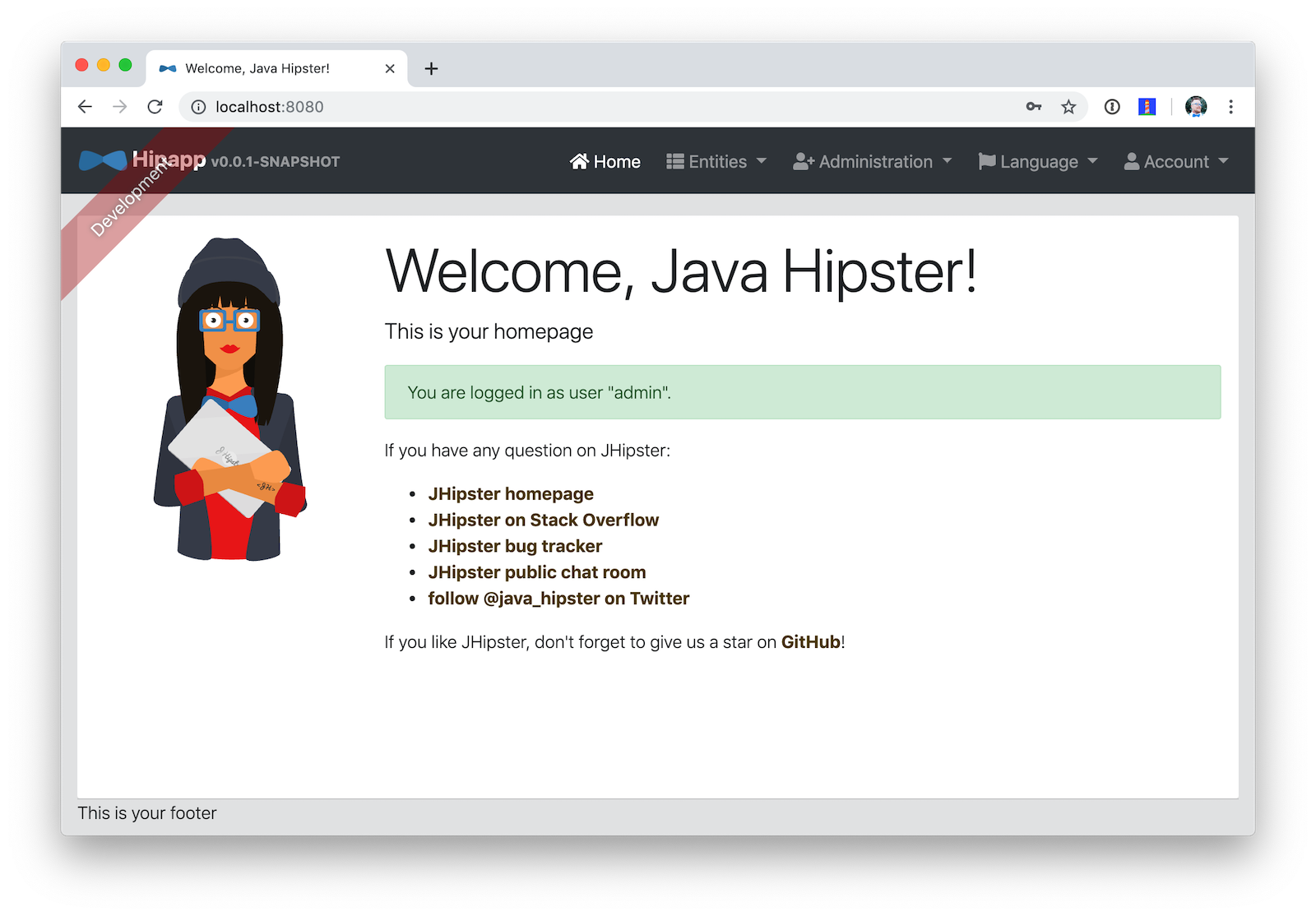 Pretty slick, eh? You just created a modern single page application (SPA) that uses the latest released version of Angular! Not only that, but it uses the most secure form of OAuth 2.0 - authorization code flow.

Use Okta: We’re Always On!

Keycloak is an excellent project that works great for development and testing. However, if you use it in production, you’ll be responsible for maintaining it, updating it to the latest releases, and making sure it’s up 24/7. For these reasons, I recommend using Okta in production. After all, we’re always on! 😃

Once you’re signed in to Okta, register your client application.

Your settings should resemble the screenshot below when you’re finished. 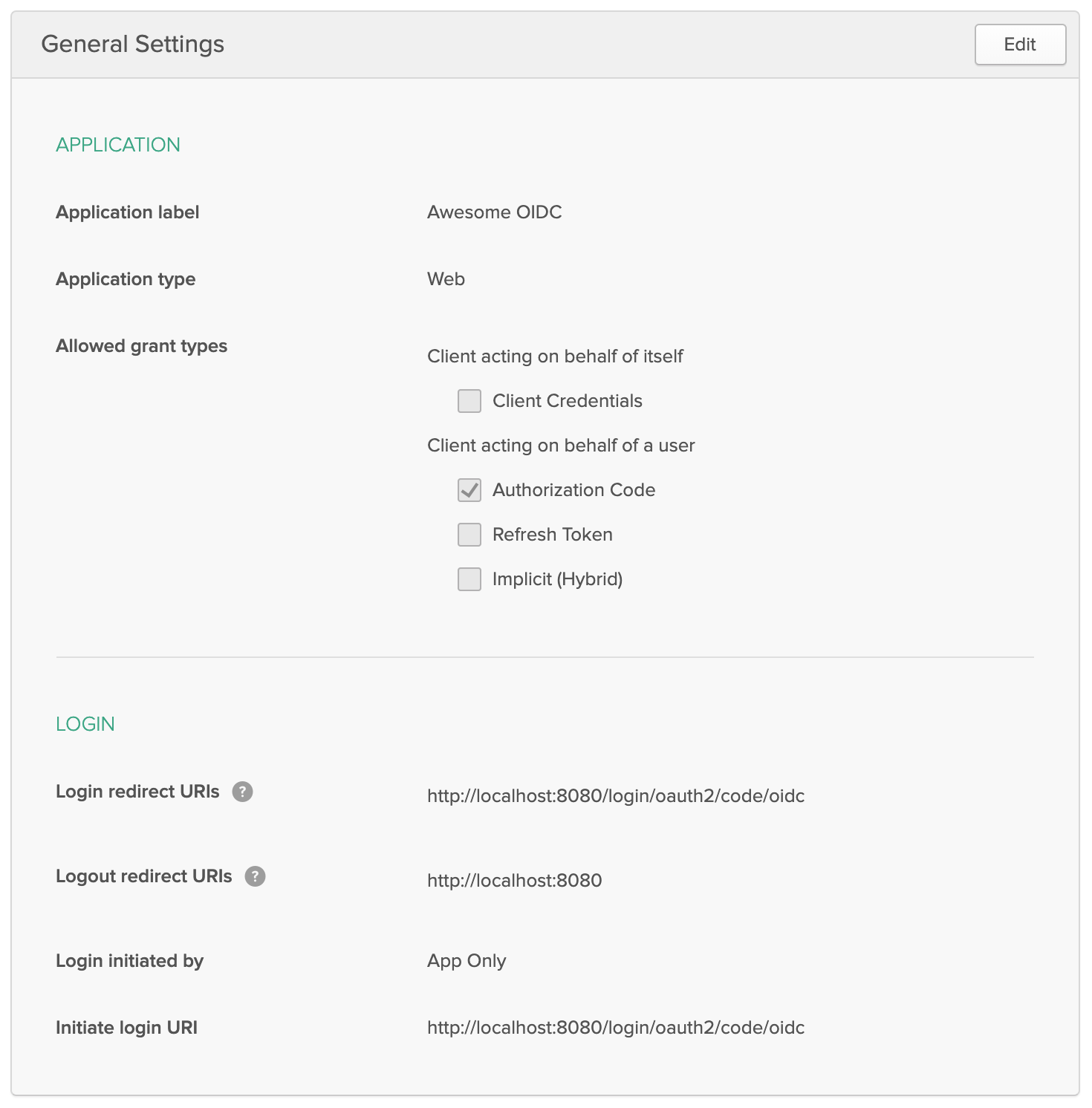 Create an okta.env file in your project’s root directory and replace the {..} values with those from your Okta application:

Create Groups and Add Them as Claims to the ID Token

JHipster is configured by default to work with two types of users: administrators and users. Keycloak is configured with users and groups automatically, but you need to do some one-time configuration for your Okta organization.

Create a ROLE_ADMIN and ROLE_USER group (Users > Groups > Add Group) and add users to them. You can use the account you signed up with, or create a new user (Users > Add Person). Navigate to API > Authorization Servers, and click on the the default server. Click the Claims tab and Add Claim. Name it groups, and include it in the ID Token. Set the value type to Groups and set the filter to be a Regex of .*. Click Create. 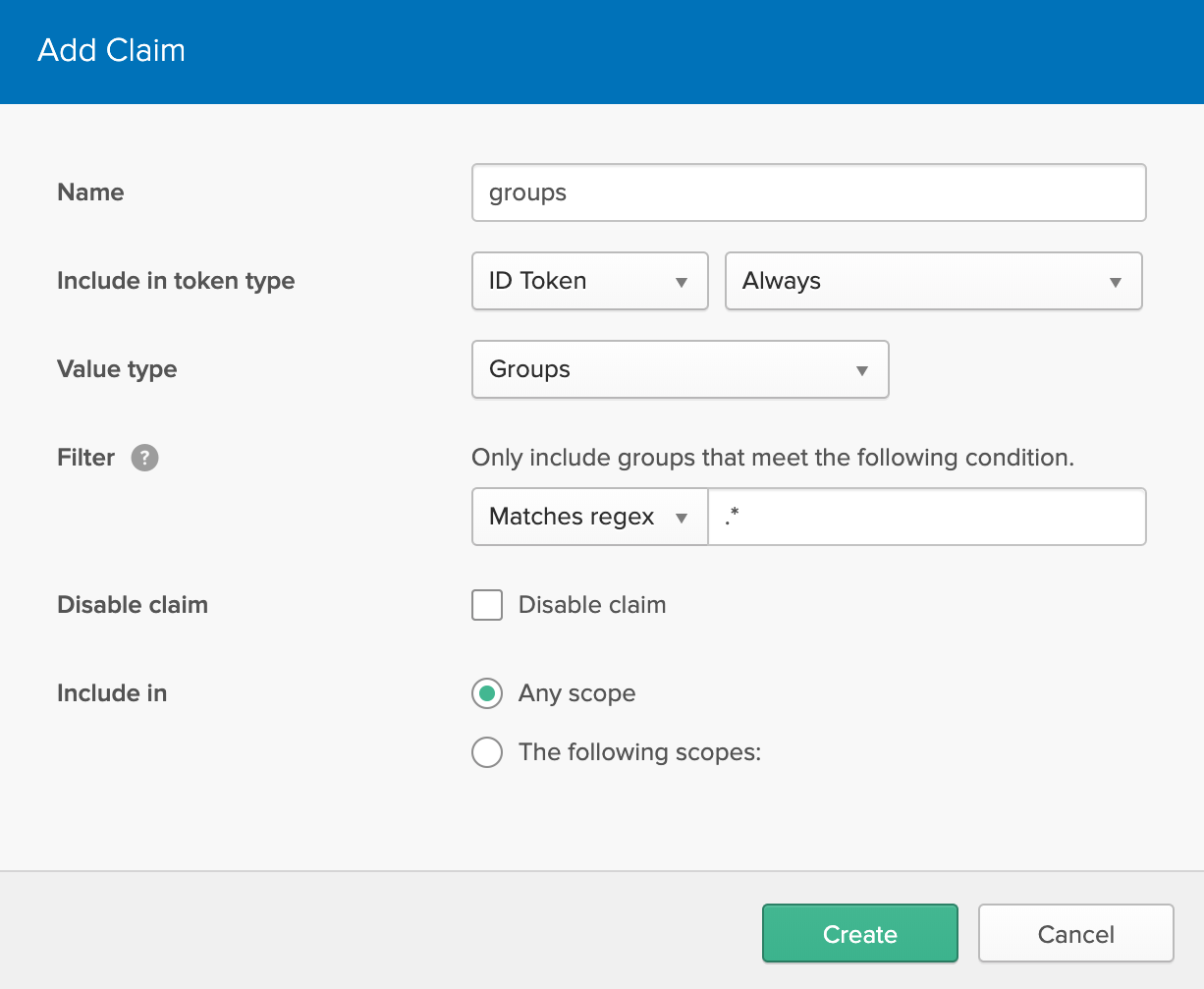 Start your application with the following commands:

Navigate to http://localhost:8080 and log in with your Okta credentials. 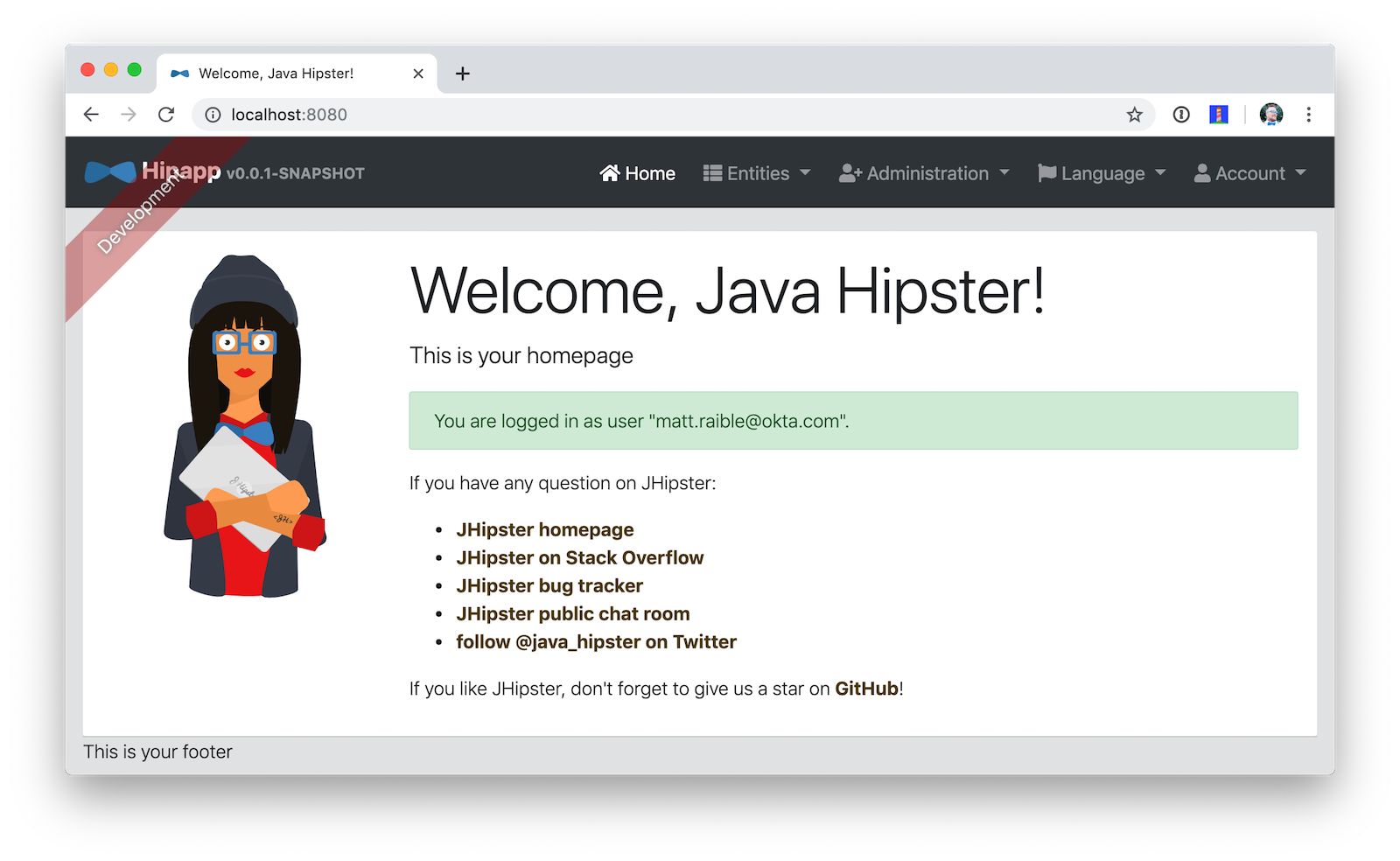 Isn’t it cool how Spring Boot and Spring Security make it easy to switch OIDC providers?!

I’ve barely scratched the service of what JHipster is capable of in this post. For example, you can create CRUD functionality for entities (with tests!) using JDL. For example, create a blog.jh file with the code below.

I did not create a GitHub repository for this post because all of the code was generated. You can find the source code for JHipster on GitHub.

Thanks JHipster and all its fabulous contributors. You all do a tremendous amount of work in your free time and it’s greatly appreciated.

Not quite ready to make the leap to JHipster 6 and Java 11+? I’ve written a few tutorials that use JHipster 5 and Java 8.

I also wrote a free mini-book on JHipster for InfoQ.

If you’d like to learn more about Spring Security 5.1 and its OIDC support, we’ve got some of those too:

Follow us on @oktadev to stay up-to-date with Java and the leading JavaScript frameworks.