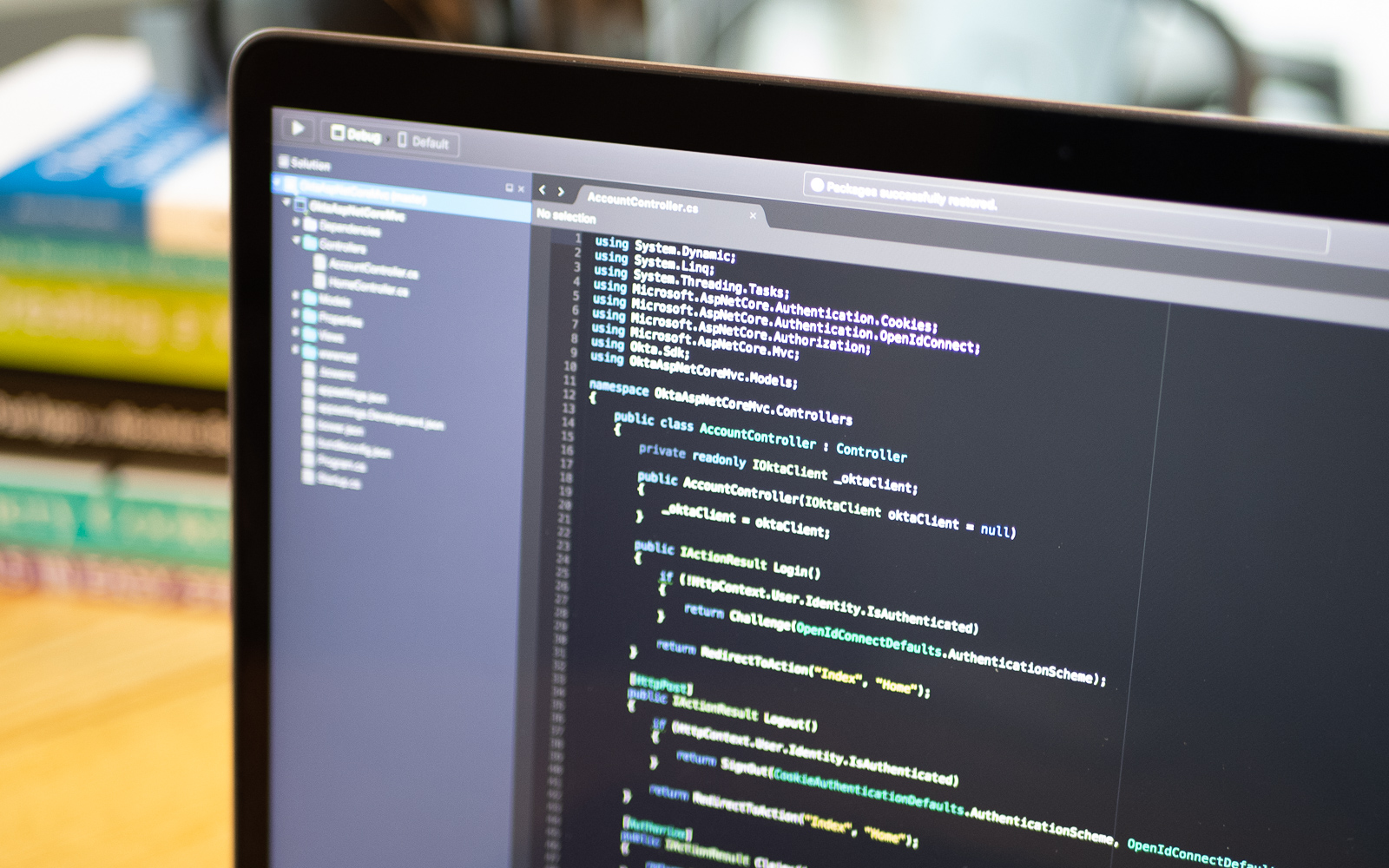 Inevitably it happens. You go to one of those bars that has three trillion beers on tap, and you stare hopelessly at the wall of taps trying to decide what to order. Panic no more! Hop Roulette is here to save you from embarrassment when the bartender asks, “What’ll it be?” Hop Roulette is a simple Azure Function that returns a random beer from an API. What use is this? It gives me a fun way to show you how to create your first Azure Function without making it a boring old “Hello World” example!

Set Up Your Environment to Build Azure Functions

This setup will allow you to code, debug, and deploy your Azure Function super easily.

First, you’ll need to log in to your Azure account. Open the command palette with CTRL + SHIFT + P and start typing ‘Azure’. You should see Azure: Sign In as one of the options. Choosing that option will open the login screen and allow you to log in to Azure. Once it completes, it will tell you that you can close that window. When you go back to Visual Studio Code, open the Azure Account extension in the sidebar.

This will bring up a file window for you to choose the location for your Azure Functions project. Then, you’ll be asked (in VS Code) what language you’d like to use for your function. You’ll choose C#. This will scaffold the Azure Functions project. When it’s finished, you’ll be prompted to Add to workspace. You will likely have to run a restore on the project. If you do, you will see a dialog box in the bottom right-hand corner of VS Code and you can just click the restore button.

The folder you are in should be the default for the folder containing your function app selection. Choose HTTP Trigger from the dropdown at the top of the editor, and name it BeerTrigger. For the namespace, you can use whatever you like. I used Okta.BeerFunction. Finally, choose Anonymous for the Authorization Level setting.

Once it’s been generated, go ahead and run the base function locally (using F5), just to make sure everything went okay.

In the output window at the end of the build output, you should see a line that says:

Go ahead and CTRL + click on that link to open that URL in a browser. You will have to add a query string parameter to make it run completely, so add ?name=Jerry to the end of the URL. You should now be greeted with “Hello Jerry” in the browser window.

Change the Azure Function to Suggest a Beer

Technically, you’ve created your first Azure Function, but this is not going to help you choose a beer and keep you from being embarrassed in front of all the hipsters drinking at the bar. So you’ll need to change the HTTP trigger function to do that.

In the BeerTrigger.cs file, start by changing the name of the endpoint so that it’s a little more interesting than “BeerTrigger”. The endpoint name doesn’t have to be same as the function name, the generator just named it that way by default. So change:

You’ll also want the endpoint to only accept GET requests and call the BreweryDB API’s random endpoint. Change the Run() function to:

You’ll need to add a using statement as well:

The code will read your API key from the environment variables, create a new HttpClient(), make a GET call to the random API endpoint and return a new object with the data shaped the way you want it for your function.

You’ll need some convenience classes to help shape the response the way you want. In that same file, add three new classes to the namespace.

The Root object is just there to help encapsulate the response data into the objects you’ll need. The Beer and Style object data is all that you’ll return from the function.

Note: Feel free to play around and add more data by looking at what the BreweryDB API returns from the random endpoint`.

Once you’ve created a free account on BreweryDB and logged in, choose Developers and My API Keys from the main menu. Copy the Sandbox Key as you’ll be using the sandbox (meaning free) tier. Notice that it is limited to 10,000 calls per day but to be honest, if you need that many beer suggestions in a day, you’ll be dead.

Replace the code in the local.settings.json file so that it is:

Replacing {yourApiKey} with your API key. The local.settings.json file is used to create environment variables when running the function locally.

Go ahead and run the function again with the F5 key.

You’ll notice the endpoint has changed. Near the end of the output in the build window, you’ll see the new URL. CTRL + click on it to open it in a browser. You should now see JSON output that describes your randomly selected beer! 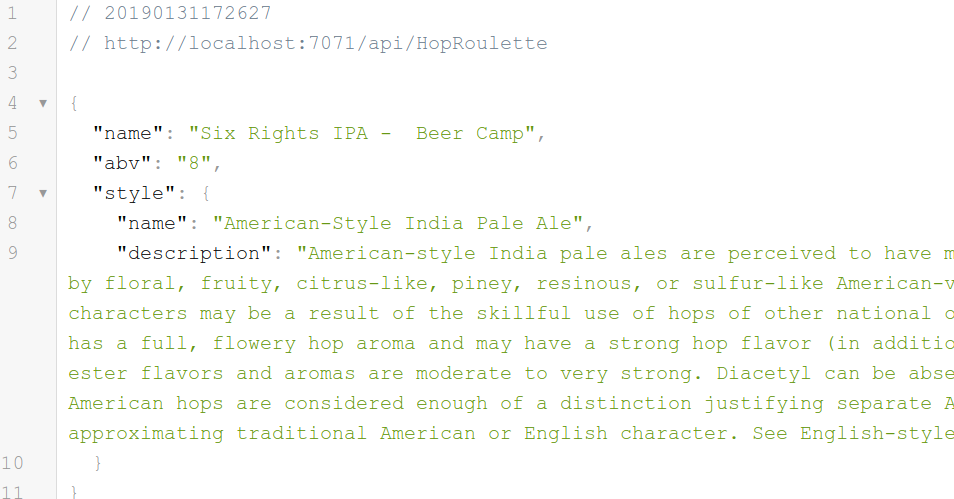 Now you’re really close to being able to get a beer suggestion, but it’s not likely you’ll have your computer with you at the bar (or maybe you will, I’m not judging). A better way would be pulling out your mobile phone and getting the suggestion right there at the bar. To do that, you’ll need to deploy this thing to Azure.

This part is super easy with VS Code. Click on the Azure Functions icon in the sidebar and find the Deploy icon. It is a blue up arrow with a line at the top.

When it is finished, you will get a pop up in the bottom right corner saying Deployment of “{Your Function}” completed. Click on View Output and in the output window you will see the URL for your deployed function.

You’re not quite finished though! Initially, you put your BreweryDB API key in the local.settings.json file. This doesn’t get deployed, so you’ll have to set up that key as an environment variable in Azure.

Log in to the Azure Portal and on the home page, click on Function Apps. Choose your function from the list of Function Apps. If Function Apps is not listed on your home page, search the portal for “Function” and Function Apps will be listed there. Choose Application settings under Configured features. Scroll down to the Application Settings heading and click on the + Add new setting link below the list. The APP SETTING NAME should be BREWERY_DB_API_KEY and the VALUE will be your BreweryDB API key. You’ll have to scroll back up to the top to find the Save button.

Now you should be able to go to the URL for your new function and get a beer suggestion!! You can also see your URL on the Overview tab for your function in Azure.

NOTE: Don’t forget to add api/{yourFunctionName} to the URL to get to the endpoint! Cheers!!

If you liked learning about Azure, check out some of these other posts about Azure and .NET!