Java has been at the forefront of [microservice](https://www.okta.com/blog/2021/02/microservices/) architectures since they came to prominence a few years ago. It’s a popular language with well-known, high-quality frameworks, like Spring Boot, Spring Cloud, Spring Data, and Spring Security.

Spring Boot 2.0 introduced a new web framework called Spring WebFlux. Previous versions of Spring Boot only shipped with Spring MVC as an option. WebFlux offers a way for developers to do reactive programming. This means you can write your code with familiar syntax and, as a result, your app will use fewer resources and scale better.

Spring WebFlux’s API has a similar syntax to Spring MVC. For example, here’s the Spring MVC code for creating a new Points entity.

The same functionality when implemented with Spring WebFlux returns a Mono and uses a more functional, streaming style to avoid blocking.

You can find the completed source code for this example on GitHub, in the oktadeveloper/java-microservices-examples repository.

JHipster is an open-source project that started as an application generator, based on Yeoman. It’s also the most popular Yeoman generator. JHipster initially allowed you to generate AngularJS and Spring apps. In the last five years, it’s become a platform with extensibility, grown a thriving community, and has saved developers many hours of pain and frustration.

You see, JHipster integrates everything for you. Do you want to use Angular with Spring Boot? It’s got that. React? Yep. Microservices with Spring Cloud? Check!

JHipster 7 beta 1 was recently released, and it packs a punch! A couple of slick features that I like are Vue support and reactive microservices with Spring WebFlux. To be fair, WebFlux and Spring Cloud Gateway have been an option since JHipster 6.8.0 in March 2020, but now we have R2DBC support too!

In this tutorial, I’ll show you how to generate a microservice architecture that uses OAuth 2.0, an API gateway, and two microservices (a blog and a store). The gateway will use PostgreSQL with R2DBC, the blog will use Neo4j, and the store will use MongoDB. All persistence options are powered by Spring Data.

After installing JHipster, you can run the following command to answer a whole slew of questions and create an app. 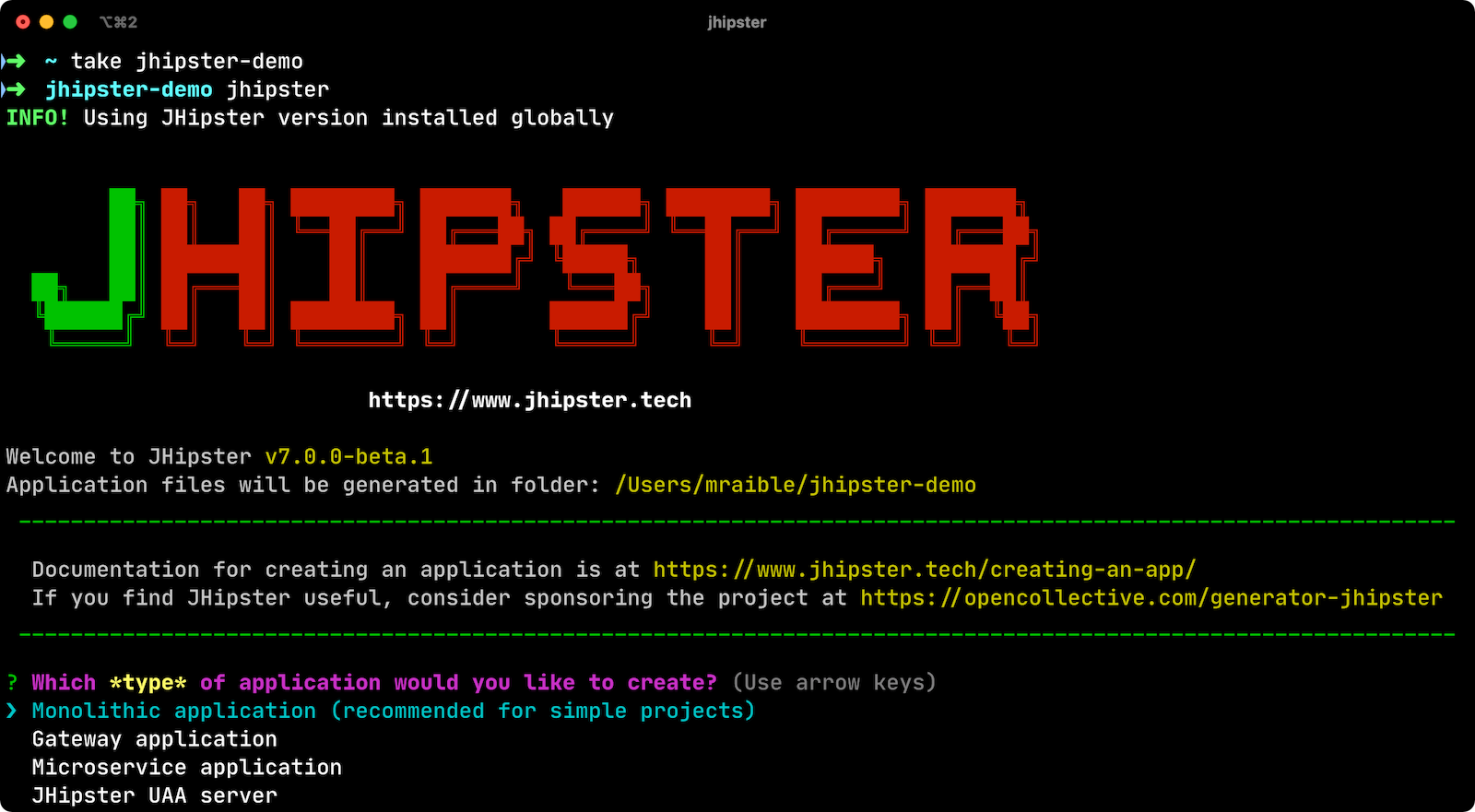 However, there’s an easier way. JHipster has its own domain language!

JHipster Domain Language (JDL) offers a way to define apps, so you don’t have to worry about fat-fingering your answer to the jhipster command’s questions.

Create a new directory on your machine and navigate into it in your terminal.

Copy the JDL below and put it into a reactive-ms.jdl file.

As part of this process, several Docker Compose files are generated for you. These allow you to run databases, the JHipster Registry (for service discovery), Keycloak (for identity), all with Docker.

After JHipster finishes generating your apps, you can run them with Gradle. Assuming you’re in the same top-level directories you ran jhipster jdl from, you can run the following commands to start all the backend services for each microservice.

Open a new terminal window, start the blog app’s Neo4j database, and then the app itself.

Then, open another terminal window, start the store app’s MongoDB database, and the microservice.

Open http://localhost:8080 in your favorite browser. You should be able to login with admin/admin as credentials. 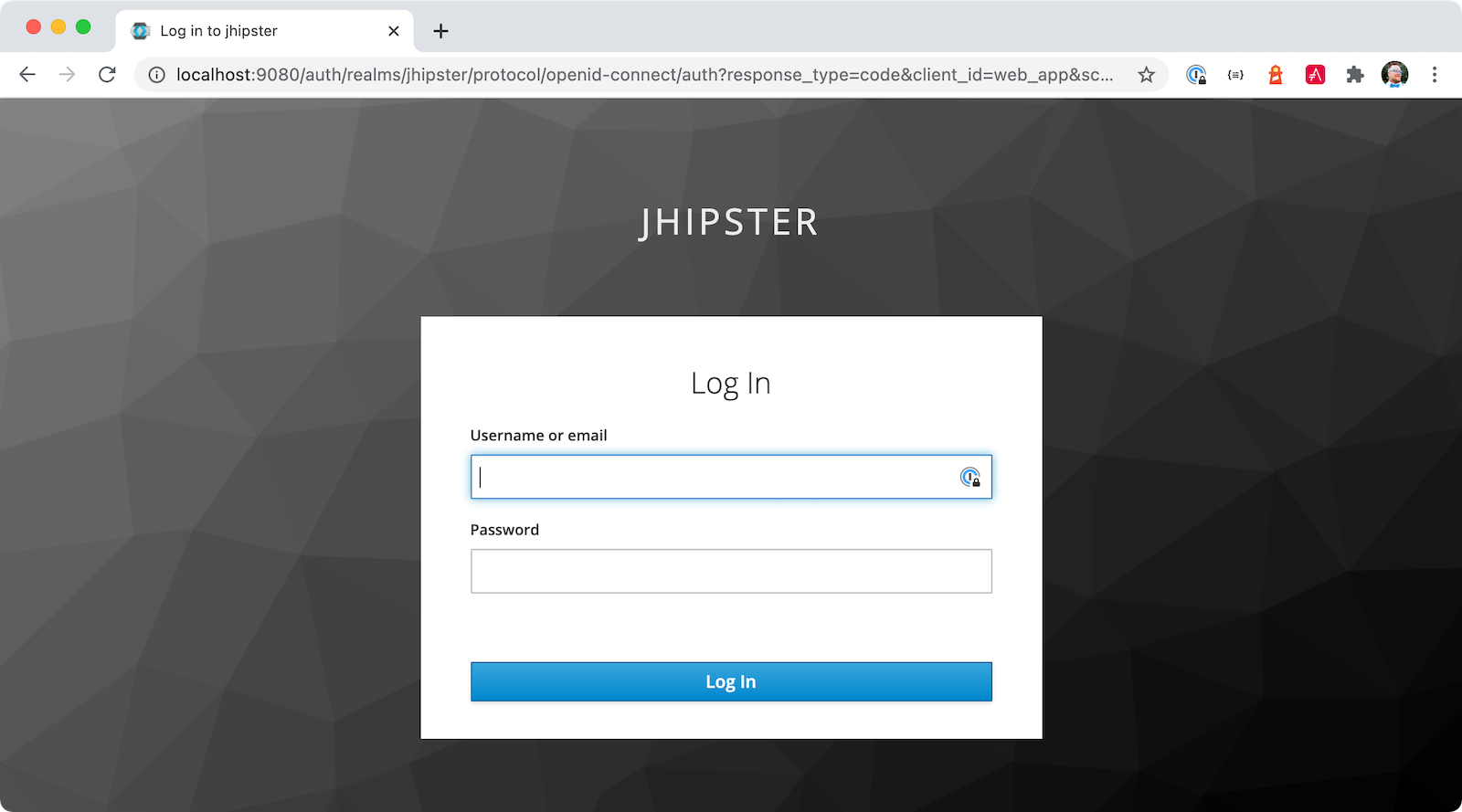 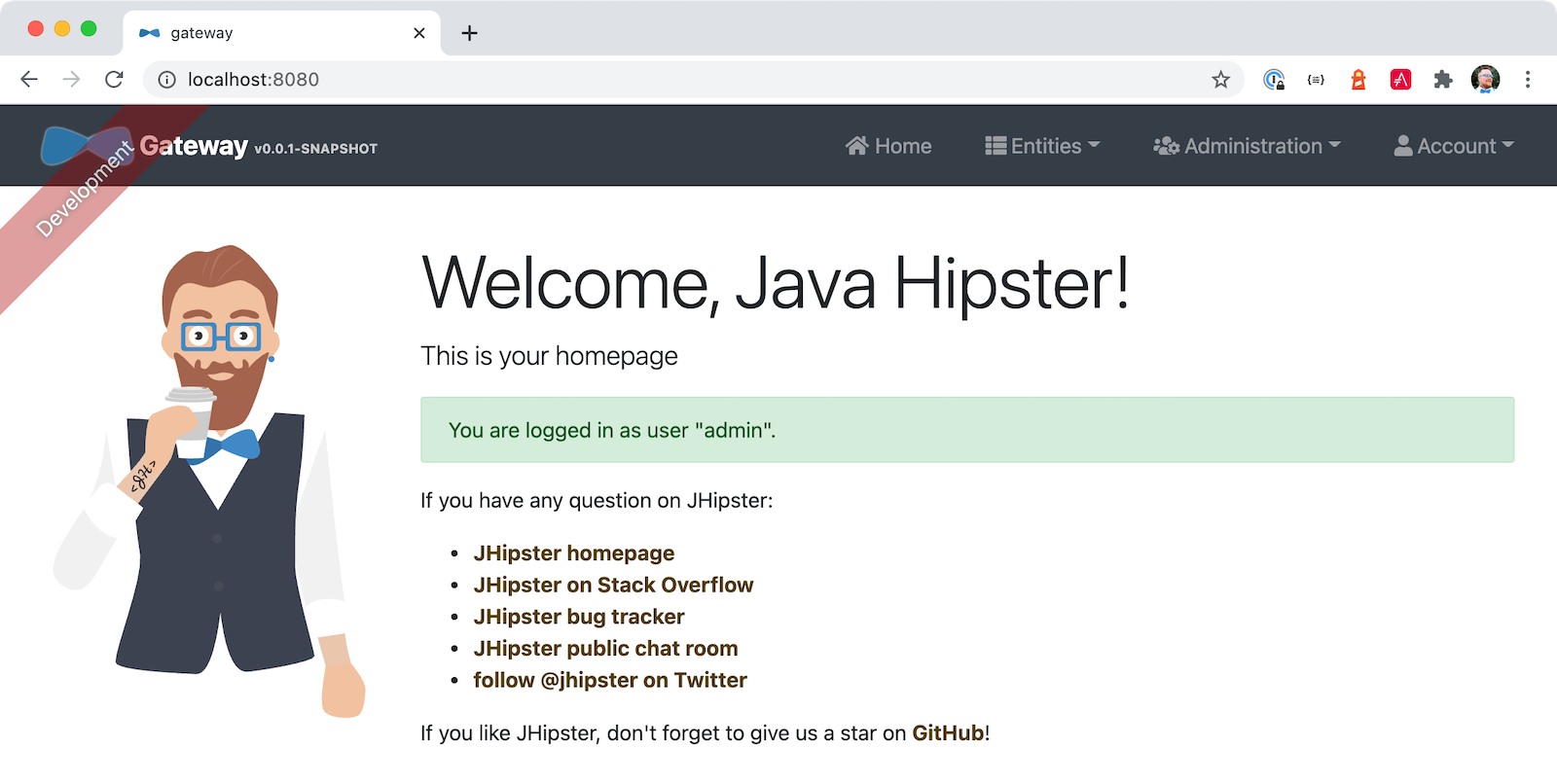 Make sure you can add a new blog, edit existing posts, and add new products.

To prove everything works in an automated fashion, you can run npm run e2e in the gateway project’s directory. This will run a number of end-to-end tests with Protractor.

Keycloak is a superb open source identity provider. It has excellent support for OAuth 2.0 and OpenID Connect (OIDC) and easily runs in a Docker container. I greatly appreciate Keycloak’s ease-of-use. I also appreciate Spring Security’s OAuth and OIDC support.

Spring Security makes it so you only need to override three properties to switch from Keycloak to Okta!

In production, you might not want to manage your own identity provider instance. That’s where Okta comes in. We’re a developer-friendly SaaS company that provides OAuth and OIDC support as a service. You can create a developer account and use it for free. Our Okta CLI makes it super easy.

Install the Okta CLI using the aforementioned website and come back here when you’re done. If you don’t have an Okta developer account, run okta register.

This process does several things:

I mentioned earlier that Spring Cloud Config allows you to distribute Spring’s configuration between apps. In this section, you’ll configure JHipster’s Spring Security settings to use Okta across all your services.

Add the following YAML to gateway/src/main/docker/central-server-config/localhost-config/application.yml. You can find the values for each property in the .okta.env file.

Use Ctrl+C to kill all your ./gradlew processes and start them again.

Now, open a new incognito browser window, go to http://localhost:8080, and sign in. Rejoice that using Okta for authentication works! 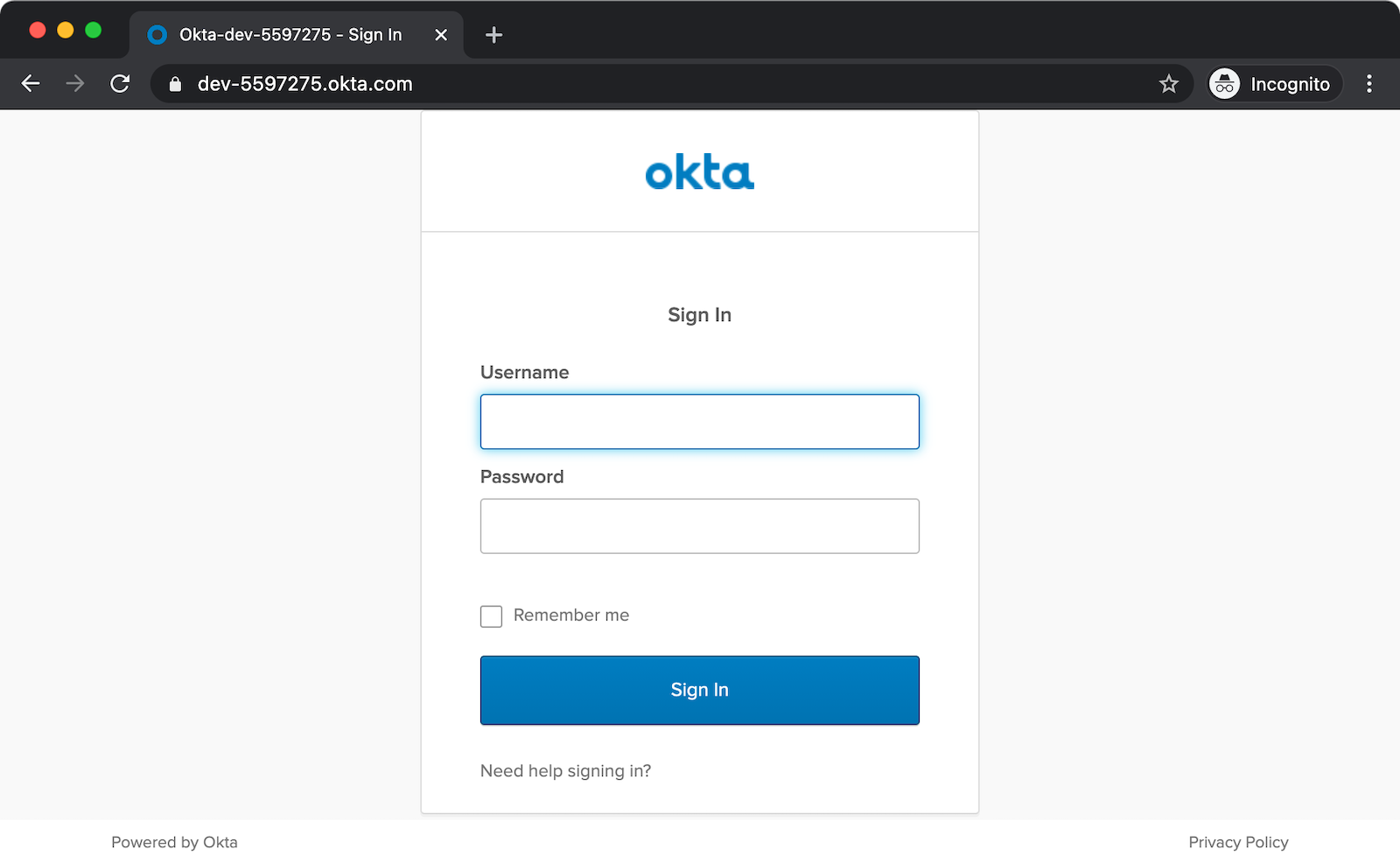 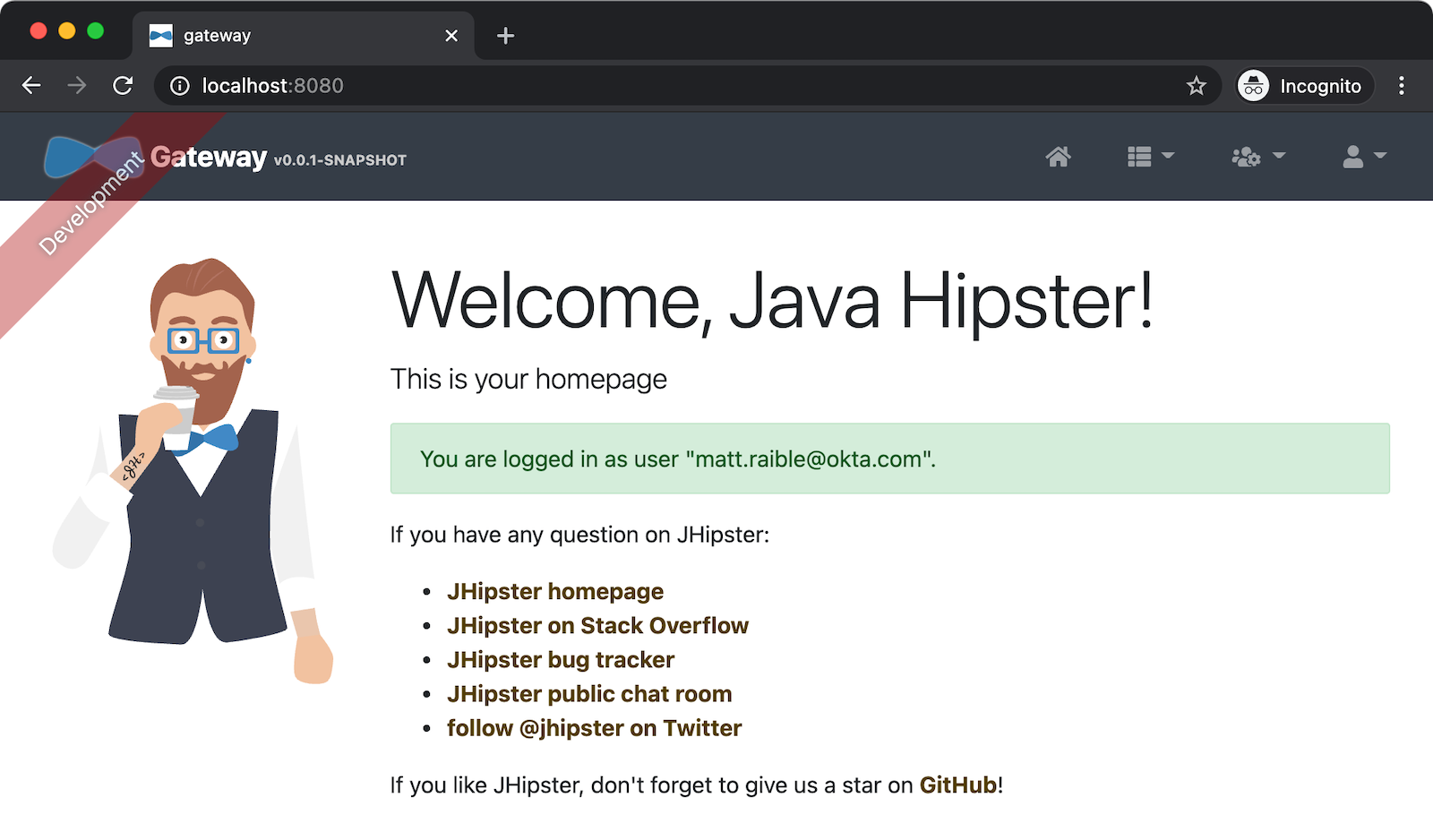 If you’re feeling lucky, you can set your Okta credentials as environment variables and run end-to-end tests (from the gateway directory).

The JDL you used to create this reactive stack contains Docker configuration, so you can run everything with Docker Compose.

To run your reactive stack with Docker Compose, you need to create Docker images for each app. In your three different app directories, run the following Gradle command:

Once your Docker containers are finished building, you’ll want to add your Okta settings to Spring Cloud Config in JHipster Registry.

Open docker-compose/docker-compose.yml in your favorite IDE (I like IntelliJ IDEA) and remove the Keycloak image at the bottom. You can leave it if you like, but it won’t be used in this example.

Update docker-compose/central-server-config/application.yml to contain your OIDC settings that you want to share with all your microservices.

In the docker-compose directory, run the following command to start all your containers. 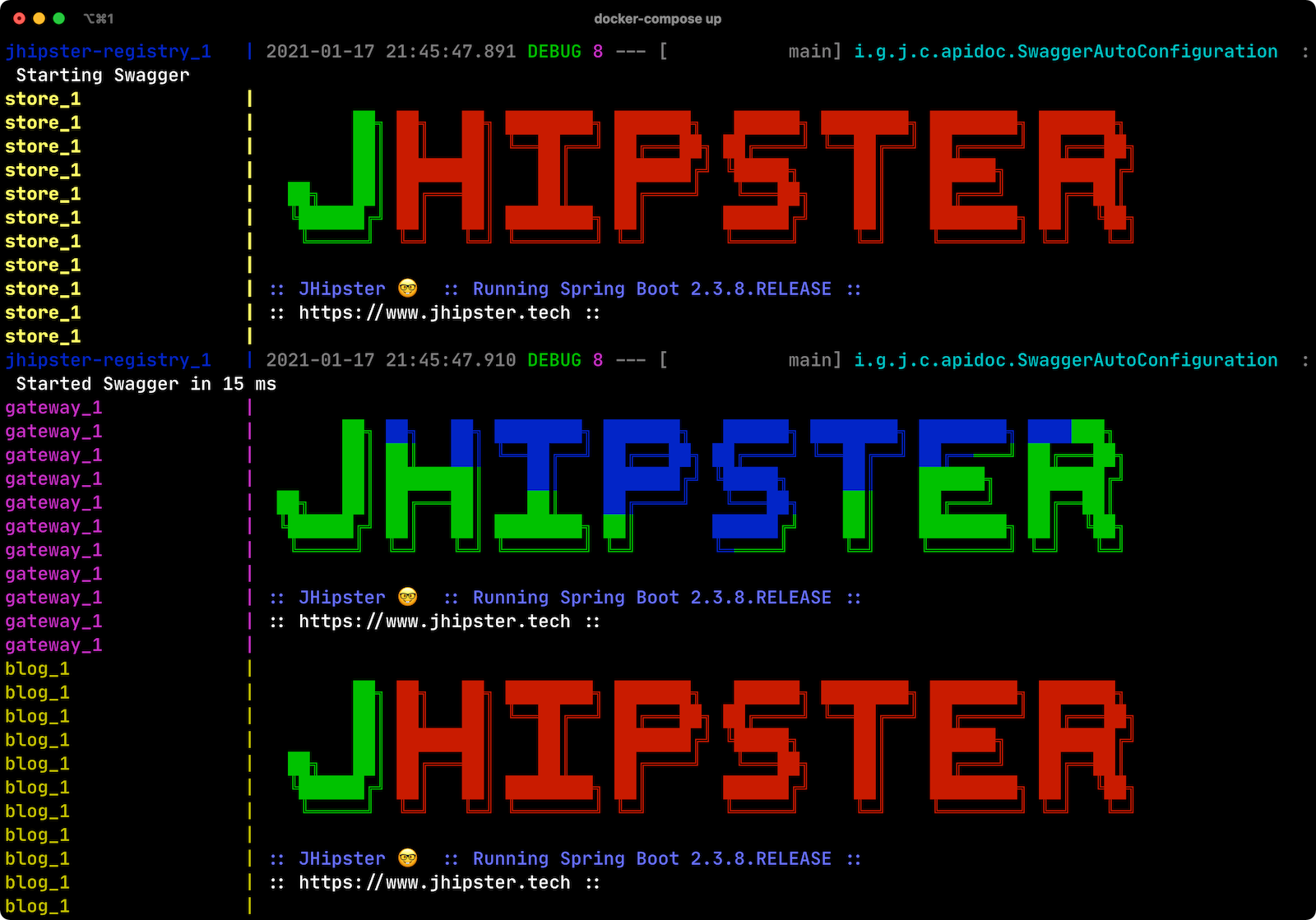 You should be able to open http://localhost:8080, sign in, and access all of your microservices. Pretty slick, eh?! 🤓

What About Kotlin Microservices?

You can install it using npm:

Then, use khipster jdl reactive-ms to create the same stack you did above with Kotlin.

How Do I Deploy to the Cloud?

JHipster creates a cloud-native microservices architecture that can be deployed to many cloud providers. There’s specific support for AWS, Microsoft Azure, Heroku, and Google Cloud Platform.

However, if you’re doing microservices, you’ll probably want to leverage Docker as you did in this tutorial. When your apps are containerized, they can be orchestrated with Kubernetes.

JHipster has a Kubernetes sub-generator that you can use to deploy it to the cloud. I’ll cover this in a future tutorial.

In the meantime, you can watch a presentation that Ray Tsang and I did recently that shows how to deploy JHipster microservices with Kubernetes. If you start watching from 46:18, you’ll see Ray show how to deploy to Google Cloud using Kubernetes.

Should You Go Reactive?

As with most software architecture decisions, it depends. Are you building CRUD apps? Then no, Spring MVC is good enough.

Are you dealing with massive amounts of steaming data and millions of customers? Then yes, reactive frameworks like Spring WebFlux might just save you $$$ on your monthly cloud bill.

What about Project Loom? Will it allow you to write regular non-reactive code that performs as good as reactive frameworks? I’m not sure. I’m betting on reactive for now. I think it’s a good skill to have for Java developers.

If you want to learn more about Project Loom, I recommend listening to Episode 8 "Project Loom" with Ron Pressler from the Inside Java Podcast.

This tutorial isn’t an in-depth guide to programming reactive Java microservices. That’s because it doesn’t have to be! With JHipster, you can generate high-quality reactive Java code (~70% test coverage) that’s based on fantastic frameworks like Spring Boot, Spring Cloud, Spring WebFlux, and Spring Security.

JHipster also implements most of the patterns in my Security Patterns for Microservice Architectures. You can add dependency scanning with Snyk (based on Brian Vermeer’s blog post), use HTTPS locally, adopt OAuth, add CI/CD, and generate secure Docker containers, just to name a few.

You can find the completed source code for this example on GitHub, in the oktadeveloper/java-microservices-examples repository.

If you want to learn more about reactive programming’s nitty-gritty details, we have a few posts on this blog.

I’m proud to say that parts of this series were Josh Long’s initial drafts for his Reactive Spring book.

We also have several tutorials that talk about JHipster specifically:

Matt Raible is a well-known figure in the Java community and has been building web applications for most of his adult life. For over 20 years, he has helped developers learn and adopt open source frameworks and use them effectively. He's a web developer, Java Champion, and Developer Advocate at Okta. Matt has been a speaker at many conferences worldwide, including Devoxx Belgium, Devoxx France, Jfokus, and Devnexus. He is the author of The JHipster Mini-Book, Spring Live, and contributed to Pro JSP. He is frequent contributor to open source and a member of the JHipster development team. You can find him online @mraible and raibledesigns.com.