Gradle manages all aspects of the Android development process, making it easy to:

In true Android fashion, you can configure most aspects of Gradle’s behavior by providing Gradle with different configuration options. Going further, lots of freely available plugins add features to Gradle: extended error reporting, custom app icons, integration with other systems, etc. You can also use Groovy or Kotlin to create your own completely custom plugins.

Your App will also use Okta to safely and easily authenticate users, so you can focus on your business while Okta gives you the security you need, plus services like:

This article follows an example Android app that authenticates a user with Okta’s SDK for Android and demonstrates Gradle in Android. Please clone and set it up yourself, so you can follow along.
What you will also need:

Set Up Your Android App to work With Okta and Gradle

If you want to learn more about Okta, check out the Add Identity Management to Your Android App section of the Okta documentation for Android.

Any time you use Android Studio to build an app, install an app, or clean a project, it executes a Gradle task, a set of instructions very similar to the functions in your code. Some tasks like clean (which deletes a folder) will execute just a couple of instructions, and some other tasks like assemble (which builds a whole app) will trigger a whole sequence of other tasks.

To see an example of a very simple task, you can find the definition of the clean task in /build.gradle

Android Studio defines some tasks, like clean, by default in our project’s configuration files, but each plugin in our project could come with tasks as well. The simplest Android project already has many Gradle tasks available through the Android plugin.

You can easily get a list of all the Gradle tasks in your project in a few ways. If you like the command-line route, you can execute in the root of your project:

If you use Android Studio 3 or a newer version, you can see all the tasks listed in a tab called Gradle on the right side of your workspace. This will give you a list of nicely categorized tasks you can run with a simple double-click: 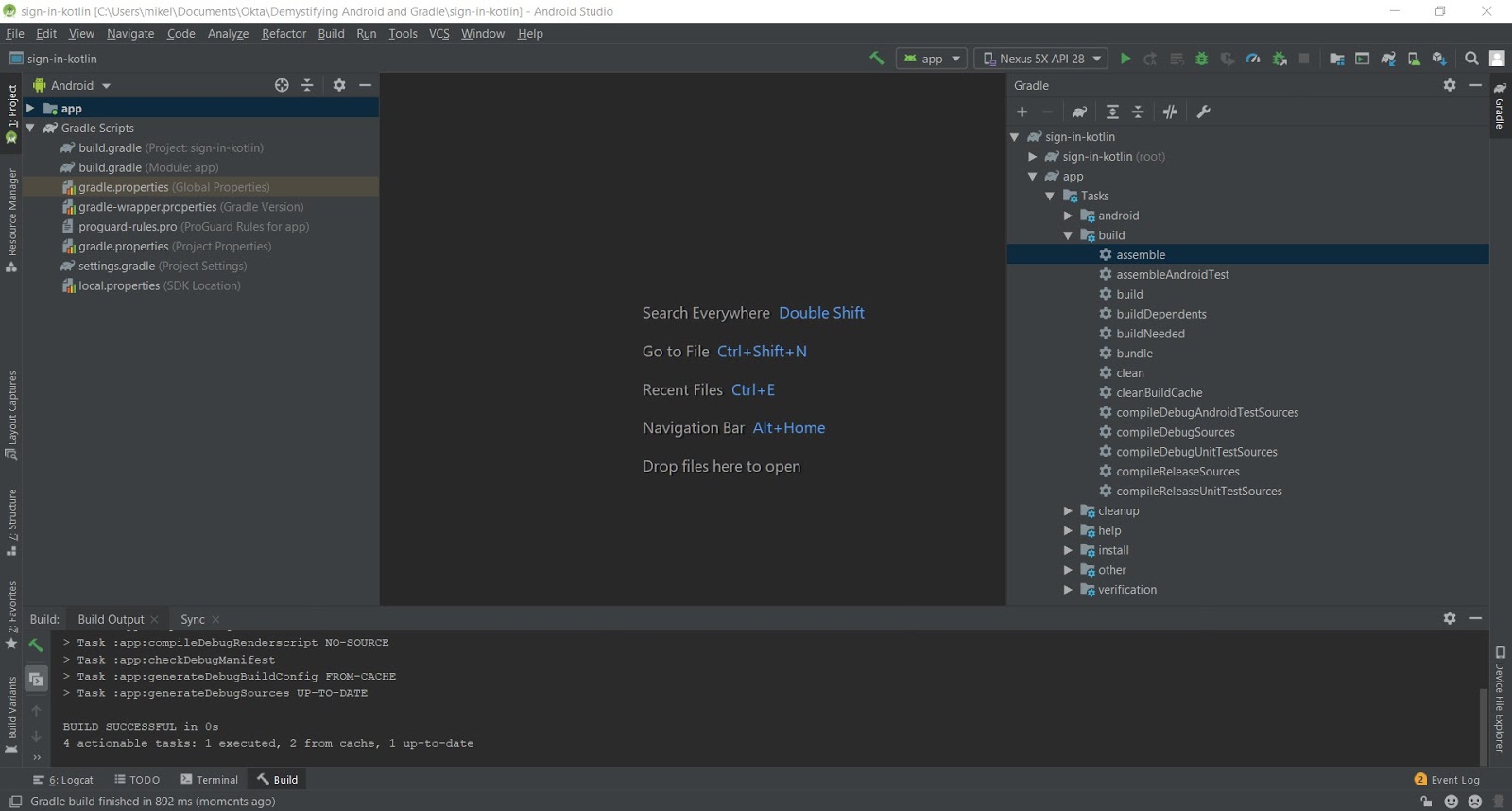 Although we won’t dive into the creation of custom tasks, I encourage you to expand your knowledge with Gradle documentation after reading this article.

How Gradle Builds an Android App

Every time you build an app, a progress report in the bottom of Android Studio shows a list of different elements:

This is the list of tasks Gradle completes to build the app. While Gradle handles these all automatically, it’s worth going through them to get a sense of what we can configure later on.

The apk file will contain:

You can then install the apk in an Android device or an emulator to use your app.

How to Configure Gradle in Android

Android Studio 3.2 introduced a much more advanced version of the Project Structure dialog, which you can use to configure most of the essential Gradle options.

This dialog is still in development and requires you to understand what each of the configuration options implies and even how Gradle organizes projects. Whether you decide to use the Project Structure or the traditional configuration files, the following points will help you understand how to work with either of them.

Gradle splits projects into modules. In Android’s case, a simple app would be a project with a single module (the app module): 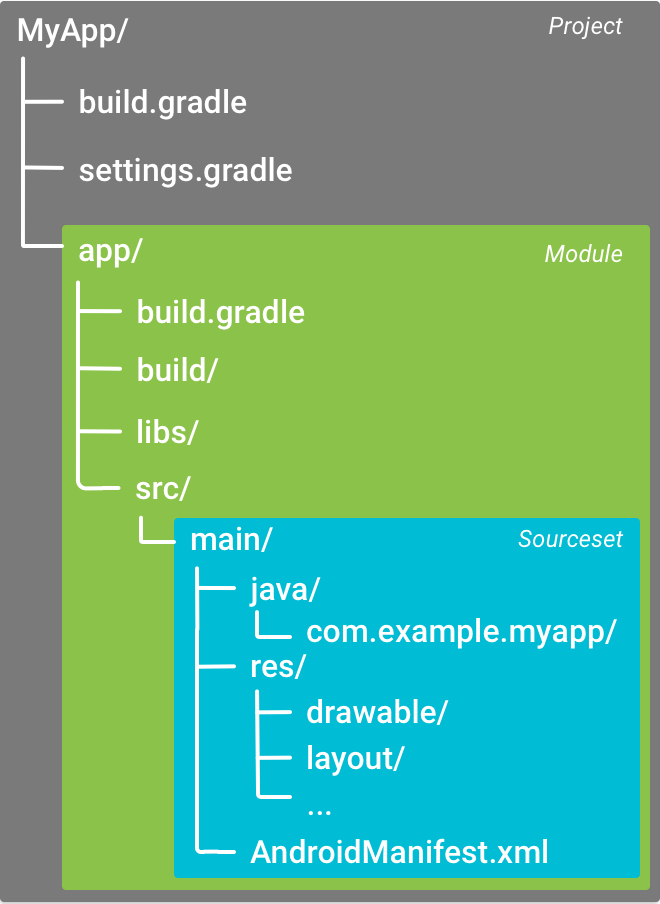 You can configure the Gradle project by modifying the /build.gradle file at the root of the project. These changes will affect the whole project, including all modules.

For instance, if an app built for Android 9 runs on an Android 8 device, this device will run the code compiled for Android 9, plus a compatibility layer that translated some of the Android 9 functionality into something Android 8 can understand. As a result, he app will be bigger, it will run more slowly on Android 8 devices, and developers may have to add additional code to support Android 8.

Multiple Gradle configurations allow developers to support as many Android versions as they judge appropriate, all of them configured at a module level. For instance, in our case we have:

Any time we reference external resources like dependencies in our project, Gradle must validate their existence and fetch them into our app. You also must configure Gradle with a list of locations for these repositories, usually defined at a project-level.

In our example, we can have a look at /build.gradle:

You can extend the capabilities of the Gradle module by applying a plugin to it. For Android applications, plugins are generally applied in a module. In our case, our /app/build.gradle applies three plugins to the app module:

The com.android.application plugin defines the module as an Android Application. This will instruct Gradle to compile our code into an apk and allow us to configure the build process using the android{} clause we see in the example. The other two plugins instruct Gradle to compile the app module to enable Kotlin. Any Kotlin code will be compiled to bytecode and put into a dex file, exactly like Java code.

Plugins are a great way to extend the capabilities of our build process. With more plugins, we can: Connect our apps to error-reporting services Add a ribbon to the launcher icon of our app to identify each build-type Use code-generation tools, Add Gradle tasks that can automatically upload an apk to a distribution service Automatically synchronize our localization files with different services, etc. If you wonder whether a certain plugin exists, both GitHub and the official Gradle Plugins portal are great resources to check.

Android projects always have a debug and a release type, defined by the Android plugin itself. Many developers customize their configuration to even add more build types. In our example app, we can see how /app/build.gradle configures the release build type and defines a new build type called blog for the app module:

This gives us the option to now choose between three app variants in Android Studio to compile/launch: 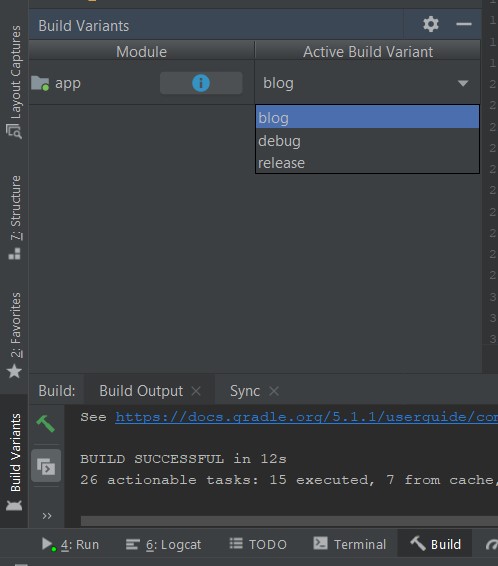 Dependencies often require certain parameters in the AndroidManifest.xml file, for each application module. Additionally, we often need to define different parameters for each build-type. Unfortunately, historical limitations introduced in the Android packaging (way before Gradle) mean there isn’t a way around this.

As we previously discussed, Gradle manages manifest files and merges them if required, so it allows us to set the value of a property in the manifest configuration. The function of the manifestPlaceholders{} block is to define an array of property and values that will be set in the manifest when Gradle builds an app.

For instance, in our example we instruct Gradle to set the value of “appAuthRedirectScheme” in the manifest:

Adding dependencies in Gradle is a very straightforward action. Just two things have to be taken into account:

If the dependency is a plugin, the required repository and dependency should be defined at a project level. In our case, as we did in /build.gradle:

If the dependency is not a plugin, it should be defined at a module level as we did in our /app/build.gradle:

There are multiple options to include module-level dependencies, based on the module-type, visibility, conflict-resolution, build-type-specificity, etc. It is worth going through the official Android documentation on dependencies to learn more about it.

You have discovered quite a bit through this article:

Gradle is a very powerful tool with a vast and overarching role in Android development. We can now use most essential options offered by Android to configure our build process and match our specific needs, with a clear view of what is happening at all times. We can now also see how simple it is to automate repetitive manual tasks in our development process, create of additional tasks to verify our builds, run code analysis tools, and more.

Even further, the Android documentation is full of more advanced topics to improve your apps:

Keep learning about Android and how to easily secure your apps with our extensive set of developer guides, our documentation for Identity Management in Android, and these additional resources: