In 2019, Node.js turned 10 years old, and the number of packages available on npm crossed one million. Downloads for Node.js itself continues to rise, growing 40% year over year. Another significant milestone is Node.js recently joined the OpenJS Foundation, which promises to improve project health and sustainability, as well as improve collaboration with the JavaScript community at large.

As you can see, a lot has happened in a relatively short amount of time! Every year the Node.js community has gained momentum, and 2020 shows no signs of slowing down.

There are lots of interesting features being explored for the next major releases of Node.js. In this post I’ll explore some of the most significant updates the Node.js community can expect in 2020. 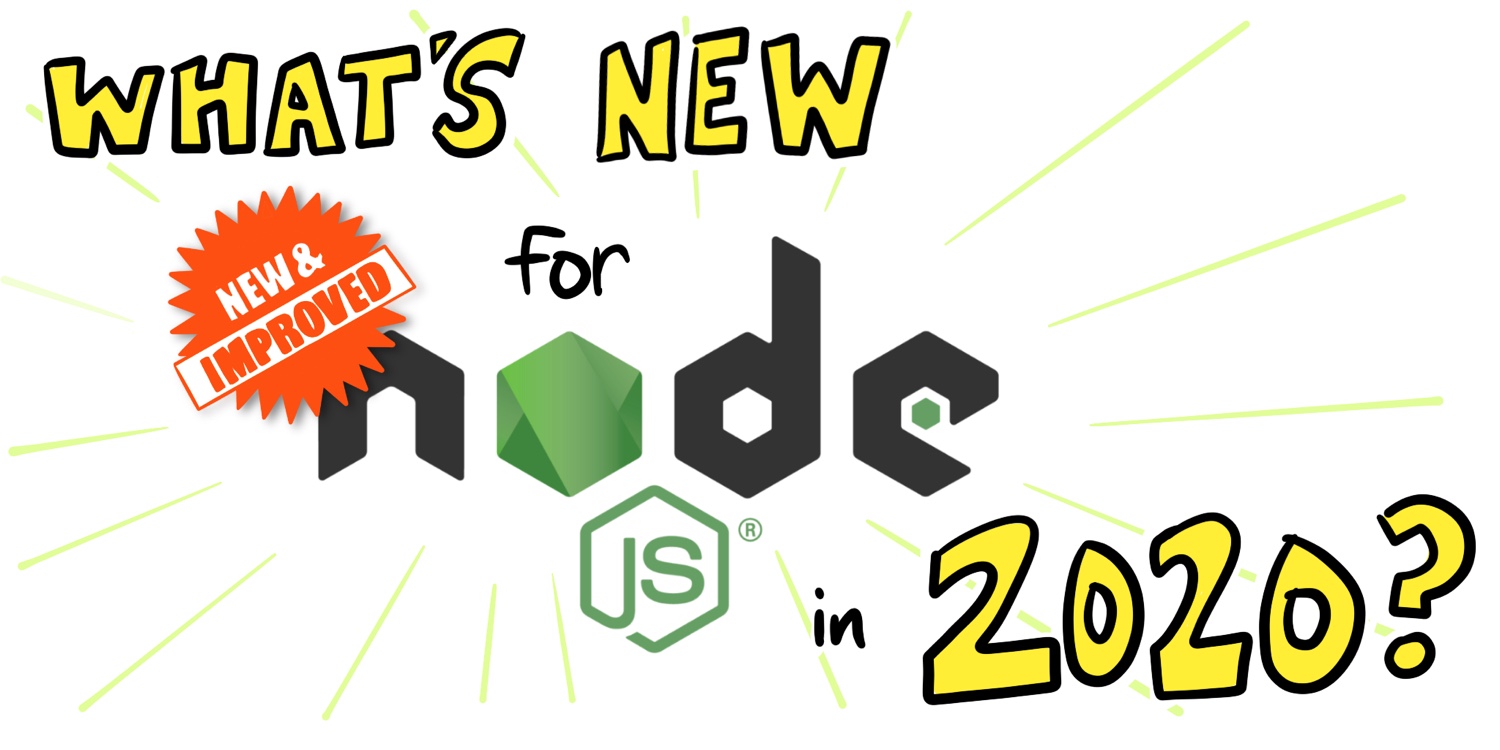 As of this writing, the most recent release of Node.js is 13. There are already a number of features and updates we can start playing around with leading into 2020. Here’s a list of highlights:

Before I dive into the details of these updates, let’s take a look at what we can expect from the Node.js release schedule.

The Node.js Release Process for 2020

Odd-numbered versions (e.g. v9, v11, and v13) are released every October, are short-lived, and are not considered ready for production. You might think of an odd-numbered version as a beta version. They are designed for testing new features and changes leading up to the next even-numbered version of Node.js.

Once an even-numbered version has had time to bake for six months, it enters a new stage of life called Long-Term Support (LTS). The LTS stage is considered production-ready. For the next 12 months, LTS versions receive bug fixes, security updates, and other improvements with the goal of not breaking any existing applications. 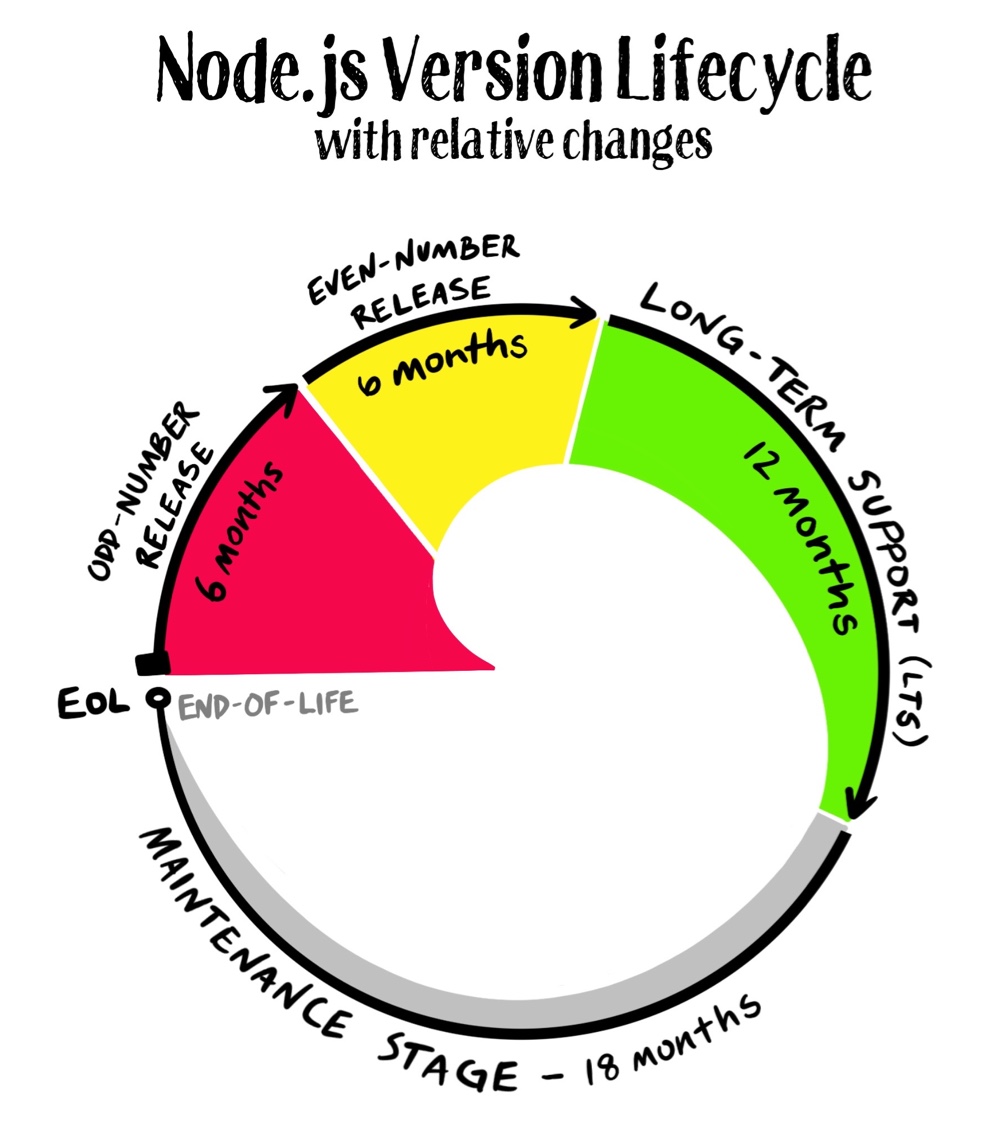 We should expect to see the following release schedule in 2020. 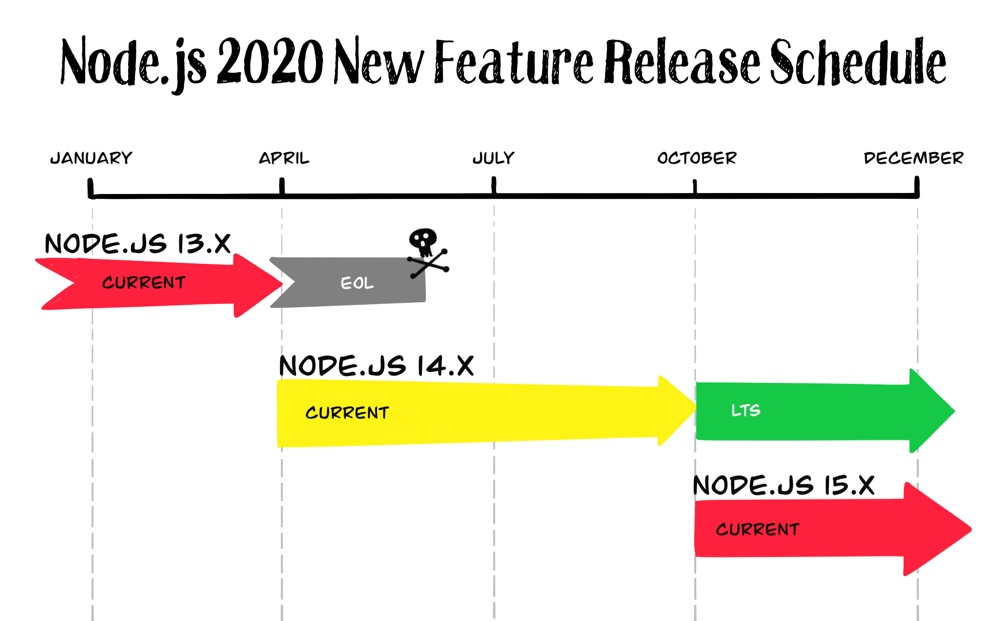 As of v13.2.0, Node.js supports both traditional CommonJS modules and the new standard ECMAScript (ES) modules out of the box. This means you can finally use import and export syntax you may already be using for client-side JavaScript running in the browser. Also, it’s important to note ES modules in Node.js have JavaScript strict mode enabled by default, so you don’t have to specify "use strict"; at the top of every file.

However, you still need to do a little work to let Node.js know you are using ES modules. The two most common ways to do this are using the .mjs file extension or specifying "type": "module" in the nearest parent package.json file.

Another possibility is enabling ES module in the root package.json file, and then renaming all CommonJS module files to use the .cjs extension.

Personally, I find the .mjs and .cjs extensions a little gross, so I’m glad to see there are ways of specifying ES and CommonJS module usage with a package.json file.

Along with ES module support comes the ability to import WebAssembly (Wasm) modules! A WebAssembly module is a portable compiled binary format that can be parsed faster than JavaScript and executed at native speeds. WebAssembly modules can be created using a language such as C/C++, Go, C#, Java, Python, Elixir, Rust, and many others.

WebAssembly module support is still in the experimental stage as of this writing. To enable the feature, you must pass a command-line flag when executing a Node.js application. For example:

As an example, imagine you have an image processing library implemented as a WebAssembly module. The syntax for using this Wasm module might look like the following.

Similar to JavaScript, WebAssembly is designed with security in mind to prevent access to any of the underlying operating system, sometimes referred to as “sandboxed.” However, there are times when a WebAssembly module in your control in Node.js may benefit from being able to make system-level calls.

This is where the new WebAssembly System Interface (WASI) comes in. WASI is designed to be a standard interface for making calls to the underlying system, such as the host application, native operating system, and so forth.

Initial WASI support was recently committed to the Node.js project. WASI is another exciting feature we may see come to Node.js in 2020!

Diagnostic reports are human-readable JSON-formatted summaries of process information, including call stacks, operating system information, loaded modules, and other useful data designed to assist in supporting applications. These reports can be triggered on unhandled exceptions, fatal errors, a process signal, or using the new process.report API. Node.js can be configured to save diagnostic reports to a specified folder and file name.

As of this writing, diagnostic reports are in the experimental. To enable this feature, you must pass a command-line flag when executing a Node.js application. For example:

As of v13.x, Node.js comes compiled with full ICU (International Components for Unicode). ICU is a mature and popular globalization library. Among many features, ICU includes support for formatting numbers, dates, times and currencies, performing time calculations and string comparisons, and converting text between Unicode and other character sets.

Other Node.js Updates for 2020

This post only begins to scratch the surface of all the hard work going into improving Node.js in 2020! If you’re interested in staying informed of the latest changes or getting involved in some way, there is a list of ways to contribute to Node.js on the Node.js web site.

If you liked reading this, we have a lot more posts you may be interested in!