Every web developer I know is concerned with the performance of their web applications. How fast will my app load? Will it handle a lot of users? How well will it lots of data? Will it scale? These are just some of the questions that developers ask themselves but very rarely have any idea how to test.

Apache Bench is a command-line application for simple load testing on a website. In this post, I’ll walk you through the basics of how to measure your web application’s performance in a simple, straightforward way.

If you have access to a Mac or Linux system, chances are you already have Apache Bench installed as a program called ab. Run a simple load test with:

NOTE: If you don’t have ab available on your system, you’ll likely need to install the apache2-utils package via your distro’s package manager. If you’re on Windows, just download the Apache Binaries .zip file, extract it, and copy the ab.exe file wherever you need it to be.

This command tells ab that you want to simulate 100 connections (-n) over 10 concurrent threads (-c) to the https://google.com/ URL.

When I ran the previous command, my output looked like this: 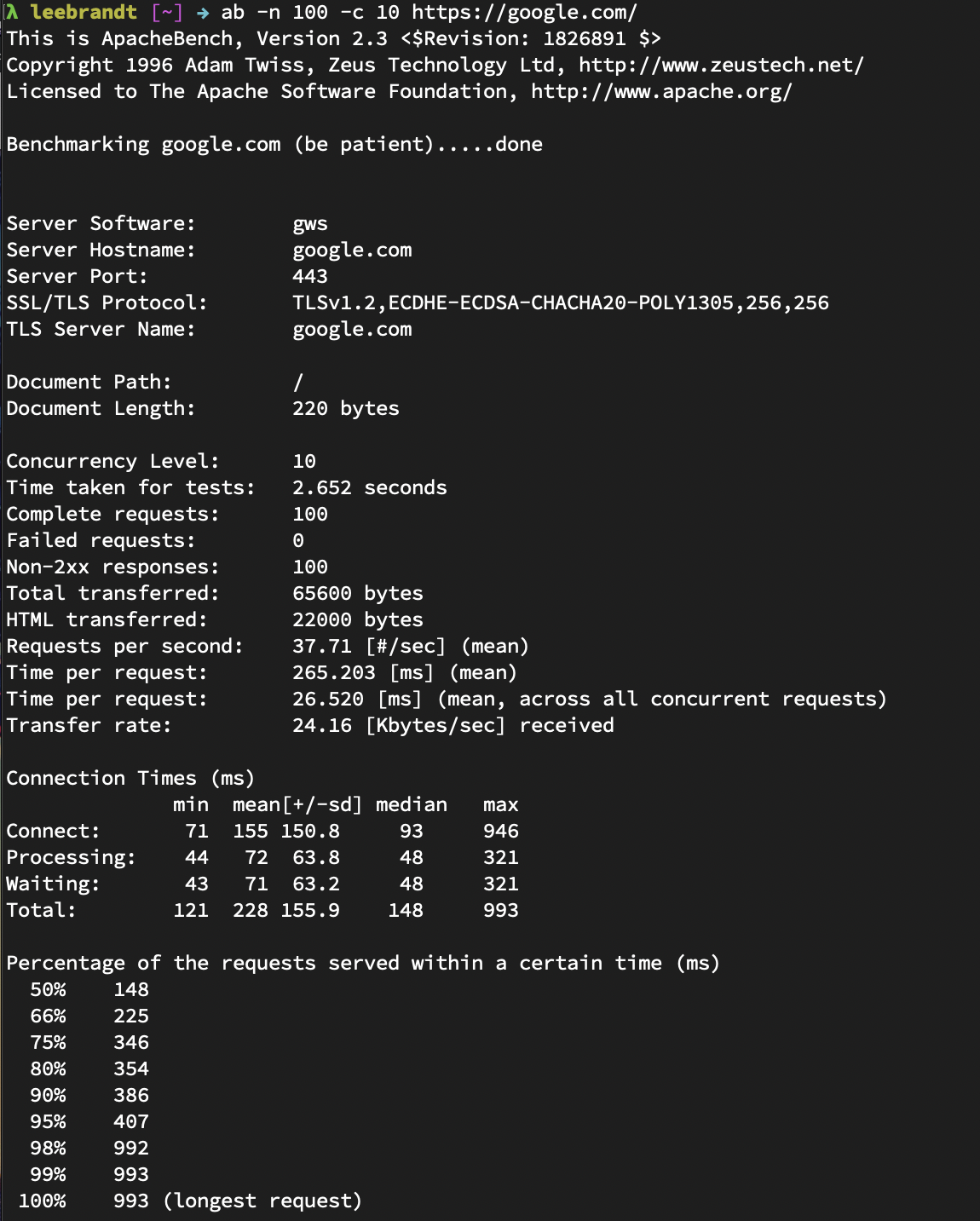 This gives me quite a bit of information about the load test run:

I told ab to use 10 concurrent threads for the 100 connections, and all tests completed in 1.907 seconds. Even though all 100 requests returned Non-2xx responses (Responses in the 200 range are the “okay” range), it says none of the requests failed. How is that possible? Chances are I got all HTTP 30x results, assuming that Google is redirecting to the google search page on requests. If all the requests had returned 2xx HTTP statuses, this line would not appear in the results.

If you use ab to help gauge the performance of your web application, I have a few suggestions to make your life easier. These rules apply to almost any performance testing scenario, regardless of whether you use Apache Bench.

Setting up automated performance testing can be easy. For example, in your continuous integration system, you can automatically run an ab test once your unit and integration tests have finished. You can then parse out the metrics you care about and fail the test if performance has degraded beyond a certain point.

Pick a Success Metric and Stick to It

The next rule of automated testing is to decide on a success metric before doing any sort of testing. What does success look like, specifically?

There are many metrics to obsess over in the performance testing world: byte size (how much data are you transmitting to the client on every request?), throughput (how many requests per second can your application sustain before degrading performance?), resiliency (will your application start failing under a certain amount of load?), connection time (how many milliseconds does it take for a client to receive a response from your application?), etc.

As a rule of thumb, I like to look at the total median connection time. This metric represents the number of milliseconds it takes for a client to send and receive a response from your application. This is as close to real-world performance as you’re likely to get, without more sophisticated tooling, and can be used as a starter metric if you’re unsure of what to test.

The final rule of performance testing is that you should always define a failure condition for your tests. Even the most sophisticated automated performance tests are useless if you don’t define what a test failure means.

Other Types of Performance Tests

As I mentioned, you can also use Apache Bench to run other types of tests under the “Performance Testing” umbrella.

ab can also help with stress testing. You can send a number of requests with a large post payload to a particular page on your website to see how it handles a lot of data. This can be handy in determining max file size uploads, etc.

You can also conduct scalability testing by running ab with requests or payloads that might trigger your infrastructure to scale up and down. Think about Kubernetes clusters of Docker containers that have rules to add new instances when the request load reaches n concurrent requests, and scale back when the load recedes. Pretty cool, huh?

Be Cautious When Performance Testing

As you might imagine, running an intense load or stress test can pose problems in a production system. These tests are basically Denial of Service (DoS) attacks. If there is infrastructure in place to help prevent these types of attacks, running a load, stress, or scalability test might trigger countermeasures. You should coordinate with the people responsible for infrastructure and administration when running any kind of performance test against a server that they manage or maintain. They’ll be much less likely to hate you if you do.

If you want to learn more about Okta and software development in general, check out some of our other awesome content!