This tutorial will show you how to use an existing JWT library to do two things:

You’ll notice the tutorial is pretty short. That’s because it’s that easy. If you’d like to dig deeper, take a look at the JWT Spec or dive into this longer post about using JWTs for token authentication in Spring Boot apps.

In practice, this information is often about two things: authorization and session state. JWTs can be used by a server to tell the client app what actions the user is allowed to execute (or what data they are allowed to access).

JWTs are often also used to store state-dependent user data for a web session. Because the JWT is passed back and forth between the client app and the server, it means that state data does not have to be stored in a database somewhere (and subsequently retrieved on every request); because of this, it scales well.

Let’s take a look at an example JWT (taken from jsonwebtoken.io) 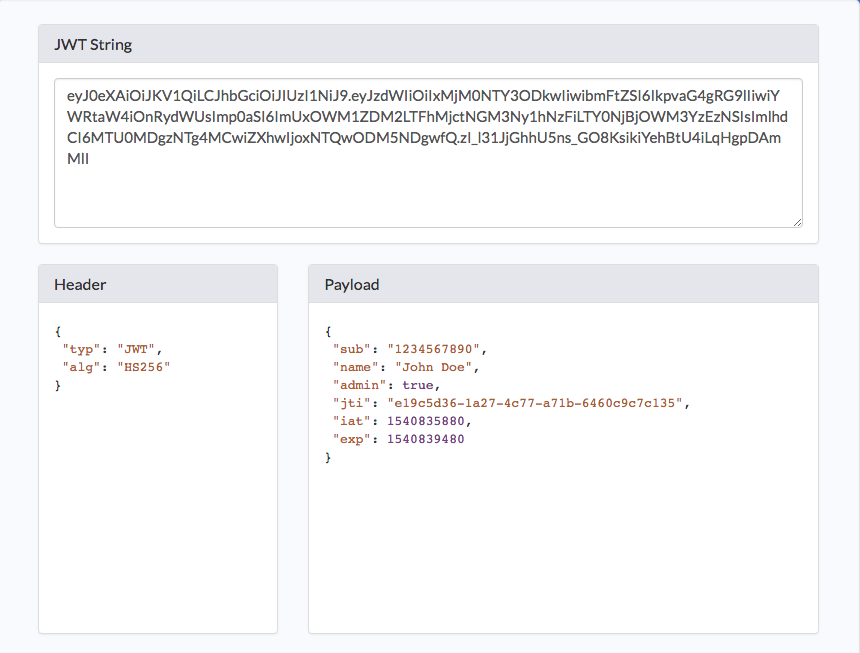 JWTs have three parts: a header, a body, and a signature. The header contains info on how the JWT is encoded. The body is the meat of the token (where the claims live). The signature provides the security.

There’s a lot of detail we’re not going to go into here regarding how tokens are encoded and how information is stored in the body. Check out the previously mentioned tutorial if you want.

Don’t forget: cryptographic signatures do not provide confidentiality; they are simply a way of detecting tampering with a JWT, and unless a JWT is specifically encrypted, they are publicly visible. The signature simply provides a secure way of verifying the contents.

Great. Got it? Now you need to make a token with JJWT! For this tutorial, we’re using an existing JWT library. Java JWT (a.k.a., JJWT) was created by Les Hazlewood (lead committer to Apache Shiro, former co-founder and CTO at Stormpath, and currently Okta’s very own Senior Architect), JJWT is a Java library that simplifies JWT creation and verification. It is based exclusively on the JWT, JWS, JWE, JWK and JWA RFC specifications and open source under the terms of the Apache 2.0 License. The library also adds some nice features to the spec, such as JWT compression and claims enforcement.

Generate a Token in Java

This parts super easy. Let’s look at some code. Clone the GitHub repo:

This example is pretty basic, and contains a src/main/java/JWTDemo.java class file with two static methods: createJWT() and decodeJWT(). Cunningly enough, these two methods create a JWT and decode a JWT. Take a look at the first method below.

To summarize, the createJWT() method does the following:

This could be customized to your needs. If, for example, you wanted to add different or custom claims.

Now take a look at the even simpler decodeJWT() method.

The method again uses the static SECRET_KEY property to generate the signing key, and uses that to verify that the JWT has not been tampered with. The method will throw io.jsonwebtoken.SignatureException exception if the signature does not match the token. If the signature does match, the method returns the claims as a Claims object.

That’s pretty much it!

For extra credit, you can run the JUnit tests in the example project. There are three tests, and they demonstrate some basic features on the JJWT library. The first test shows the happy path, creating and successfully decoding a valid JWT. The second test shows how the JJWT library will fail when you attempt to decode a totally bogus string as a JWT. The last test shows how a tampered-with JJWT will cause the decodeJWT() method to throw a SignatureException.

You can run these tests from the command line using:

The -i is to set Gradle’s log level to Info so that we see the simple logging output from the tests.

Learn More About Working with JWTs in Your Java Apps

The JJWT library makes it super easy to create and verify JWTs. Just specify a secret key and some claims, and you’ve got a JJWT. Later, use the same secret key to decode the JJWT and verify its contents.

Creating and using JJWTs is now so easy, why aren’t you using them?

Don’t forget SSL! Remember that unless JWTs are encrypted, the information encoded within them is generally only Base64 encoded, which any small child and some pets can read. So unless you want China, Russia, and the FBI reading all of your session data, encrypt it using SSL.

Baeldung has a pretty good in depth tutorial on Java and JWTs.

Also, here are some more links from the Okta blog to keep you going: