There are two main players in a federated identity system: an Identity Provider (IdP) and a Service Provider (SP). Often, the service provider is the application that you need to log in to, and the IdP is the provider of the users that can log in. 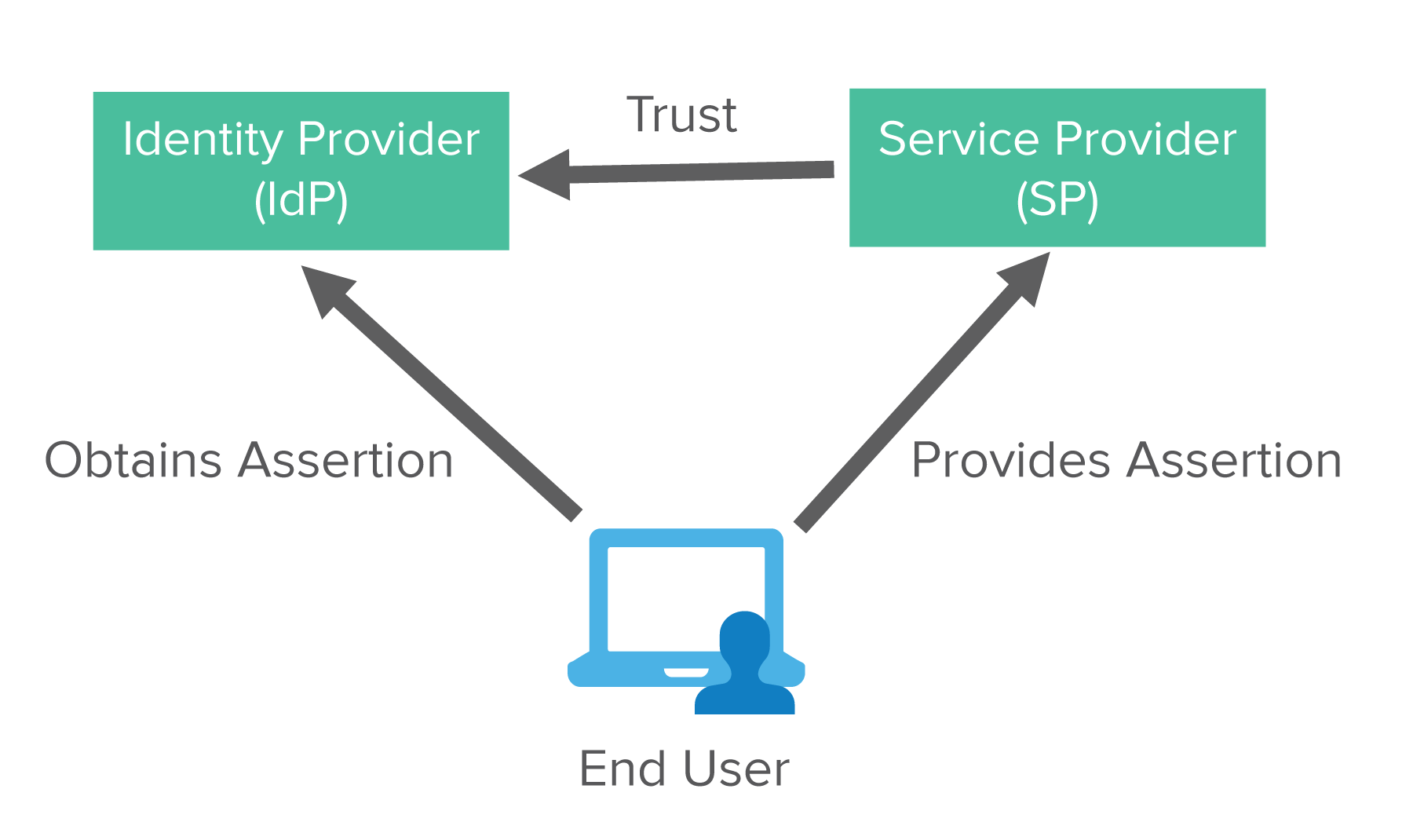 OAuth 2.0 is a delegated authorization framework which is ideal for APIs. It enables apps to obtain limited access (scopes) to a user's data without giving away a user's password. It decouples authentication from authorization and supports multiple use cases addressing different device capabilities. It supports server-to-server apps, browser-based apps, mobile/native apps, and consoles/TVs.

It's worth remembering that although there are two things called OAuth - OAuth 1.0a (RFC 5849) and OAuth 2.0 (RFC 6749) - these specifications are *completely different* from one another and cannot be used together; there is **no** backward compatibility between them. Whenever we say OAuth here, assume we mean OAuth 2.0.

To break it down simply, OAuth is where:

Client applications can be public or confidential. There is a significant distinction between the two in OAuth nomenclature. Confidential clients can be trusted to store a secret because they have backend storage unavailable to review or attack. They're not running on a desktop or distributed through an app store. People can't reverse engineer them and get the secret key. They're running in a protected area where end users can't access them.

Public clients are browsers, mobile apps, and IoT devices. The code on these devices can be extracted, decompiled, and reviewed. Therefore, we can't store any sensitive information in the application itself and expect it to be protected. Do not embed a password or secret information - including URLs - of any form in these types of applications!

The core OAuth specification describes two types of tokens: an access token and a refresh token. The client uses the access token to access an API (aka Resource Server). They're meant to be short-lived and work over a span of minutes or hours, not days or months. Due to this, the core OAuth specification doesn't have an approach to revoking access tokens but in many cases you will need to as a token could have been compromised or a subscription has expired. To address that RFC 7009 (opens new window) describes an additional endpoint to revoke a token. To be specific, this revokes it with the Authorization Server, not the Resource Server (API). Unless the Resource Server checks with the Authorization Server, it will not know the token has been revoked. This happens in the real world where you could still use your driver license to board a flight, even if it has been revoked.

The other token is the refresh token. This is much longer-lived and may last for days, months, or years. This token is used exclusively to get a new access token. Because a refresh token effectively persists access long term, getting them requires a confidential clients and they can be revoked more easily.

Next, the OAuth spec doesn't define how a token is structured, its contents, or how it's encoded. It can be anything you want but generally you'll want a JSON Web Token (JWT) as defined by RFC 7519 (opens new window) In a nutshell, a JWT (pronounced "jot") is a secure and trustworthy standard for token authentication. JWTs allow you to digitally sign information (referred to as claims) with a signature and can be verified at a later time with a public/private key pair.

Because these tokens can be short-lived and scale out, they can't be revoked; you have to wait for them to time out.

OAuth uses two channels: a front channel and a back channel. The front channel is what goes over the browser. The back channel is a secure HTTP call directly from the client application to the resource server, such as the request to exchange the authorization code for tokens. These channels are used for different flows depending on what device capabilities you have.

To address the differences between web apps, mobile clients, IoT devices, and even other APIs, there are numerous OAuth grant types or flows. The first four are defined in the core specification while the other three come from extensions. 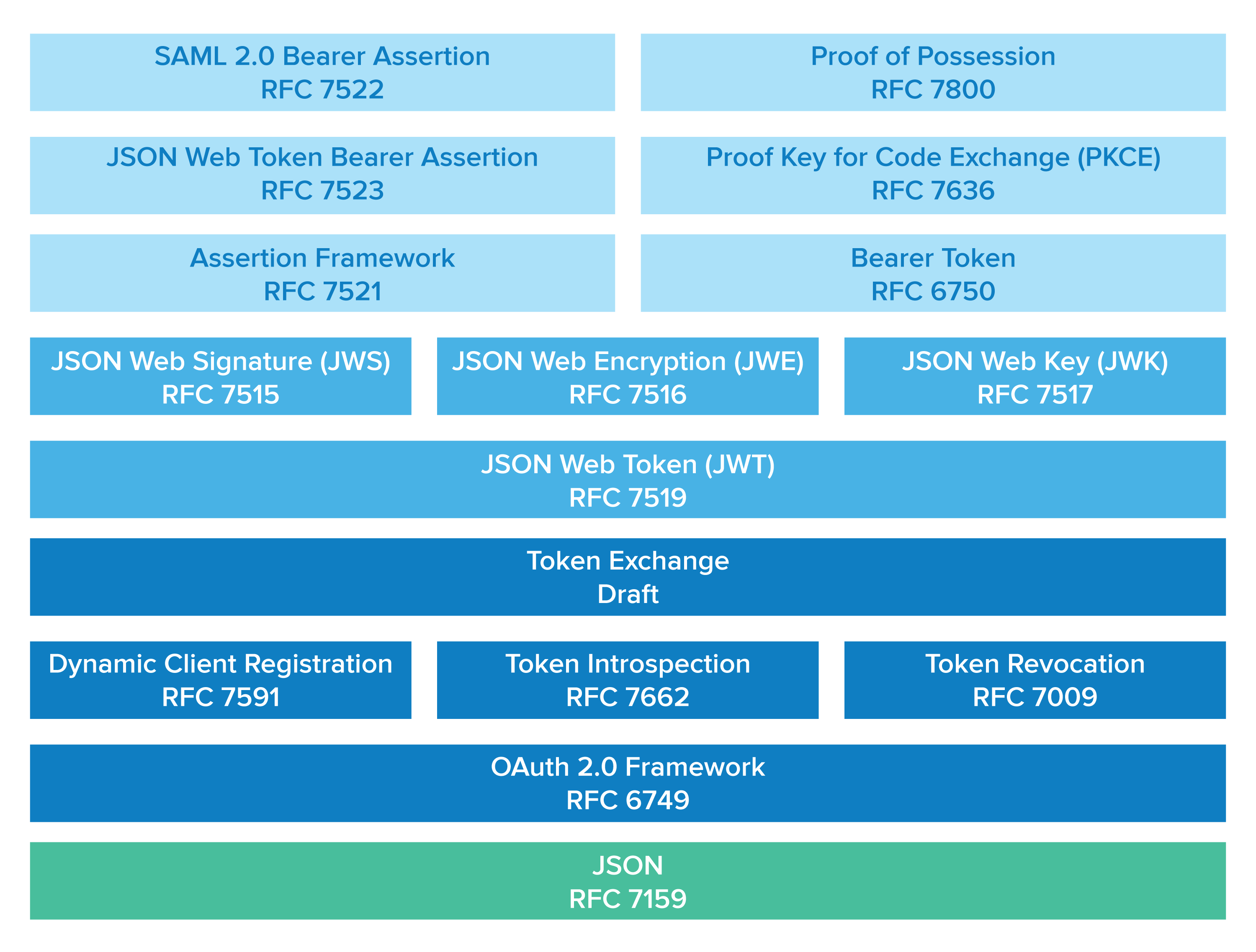 There's a huge number of additions that happened to OAuth in the last several years. These add complexity back on top of OAuth to complete a variety of enterprise scenarios. In , you can see how JSON and OAuth are the foundation. JWT, JWK, JWE, and JWS can be used as interoperable tokens that can be signed and encrypted.

OAuth 2.0 is not an authentication protocol. It explicitly says so in its documentation (opens new window). 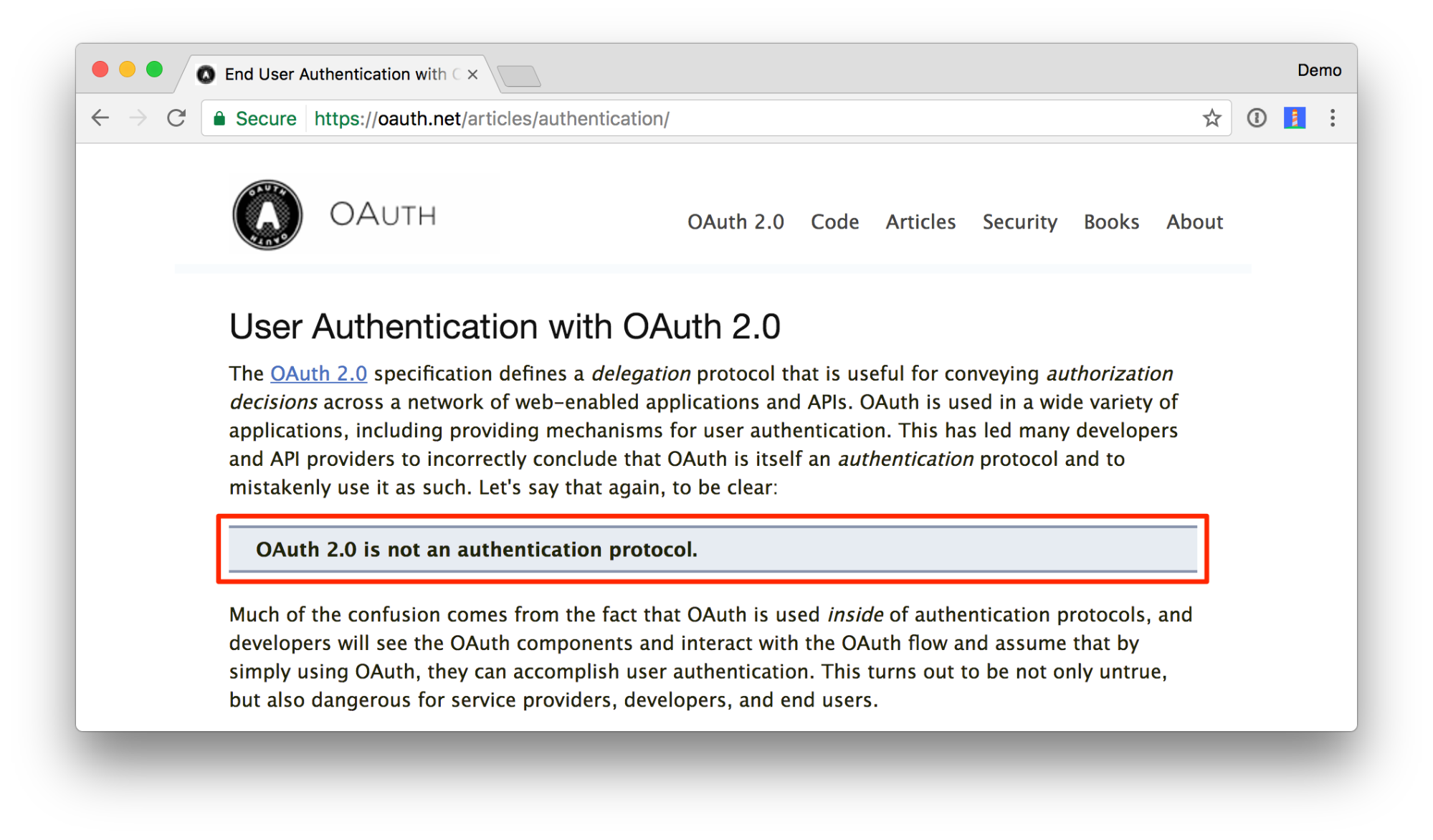 While it's easy to lose that distinction, note that everything so far has been about delegated authorization. OAuth 2.0 alone says absolutely nothing about the user such as how they authenticate or what information we have about them. We simply have a token to access a resource. Pseudo-Authentication with OAuth 2.0 Login with OAuth was made famous by Facebook Connect and Twitter. In this flow, a client accesses a /me endpoint with an access token. People invented this endpoint as a way of getting back a user profile with an access token. It's a non-standard way to get information about the user. There's no specification to support this and in fact, it was a originally a misuse of the standard networks. Access tokens are meant to be opaque. They're meant for the API; they're not designed to contain user information.

Once again, despite the very similar name, OpenID Connect is not based on or compatible with the original OpenID specification. The name comes from the OpenID Foundation which promotes, protects, and nurtures the technologies and communities involved in identity on the web.

At a technical level, OIDC extends OAuth 2.0 with a new token called the id_token on the client application side and the UserInfo endpoint on the server side. They both benefit from having a specific, limited set of scopes and well-defined set of user-related claims. By combining them, an application can request information on a user's profile, email, address, and even phone number in a consistent way regardless of the OIDC provider.

OIDC was made famous by Google, Facebook, and Microsoft, all big early adopters. The single most important part is that the consistent scopes and claims make implementations fast, easier, and compatible regardless of the provider.

In terms of implementation, an ID token is a JSON Web Token (JWT) which adheres to the specification and is small enough to pass between devices

The Authorization Code flow can also be used with Native apps. In this scenario, the native app sends a PKCE code challenge along with the authentication request. PKCE (pronounced "pixy") stands for Proof Key for Code Exchange and is defined by RFC 7636 (opens new window).

OIDC is an excellent addition to and special case of OAuth because it allows you to get a user's information and learn more about them.